Scientists drill into earthquake zone 10,000-plus feet beneath Earth's surface 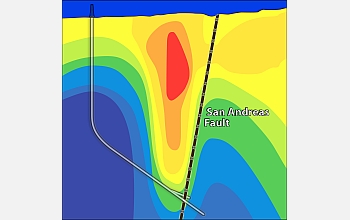 For the first time, geologists have drilled into the San Andreas Fault.

For the first time, geologists have extracted intact rock samples from two miles beneath the surface of the San Andreas Fault, the infamous rupture that runs 800 miles along the length of California.

Never before have so-called "cores" from deep inside an actively moving tectonic boundary been available to study. Now, scientists hope to answer long-standing questions about the fault's composition and properties.

Altogether, the geologists retrieved 135 feet of 4-inch diameter rock cores weighing roughly 1 ton. They were hauled to the surface through a borehole measuring more than 2.5 miles long.

"Now we can hold the San Andreas Fault in our hands," said Mark Zoback, a geologist at Stanford. "We know what it's made of. We can study how it works."

SAFOD, which first broke ground in 2004, is a major research component of EarthScope, a National Science Foundation (NSF)-funded program to investigate the forces that shape the North American continent and the physical processes controlling earthquakes and volcanic eruptions.

"This is a tremendously exciting discovery," said Kaye Shedlock, EarthScope program director at NSF. "Obtaining cores from the actively slipping San Andreas Fault is unprecedented and will allow for far-reaching, transformative research and discoveries."

Scientists seeking to understand how the margins of tectonic plates evolve and generate earthquakes have had to settle for working with samples of ancient faults uncovered at the Earth's surface by millions of years of erosion, along with computer simulations and laboratory experiments approximating what they think might be happening at the depths at which earthquakes occur.

"To an earthquake scientist, these cores are like the Apollo moon rocks," Hickman said. "Scientists from around the world are anxious to get their hands on them in the hope that they can help solve the mystery of how this major, active plate boundary works."

Drilling through the fault was completed in 2005. Next, the science team will install a host of seismic instruments in the 2.5-mile-long borehole that runs from the Pacific plate on the west side of the fault into the North American plate on the east. By placing sensors next to a zone that has been the source of many small quakes, scientists will be able to observe the earthquake generation process in unprecedented ways.

The SAFOD site, located about 23 miles northeast of Paso Robles near the tiny town of Parkfield, sits on a particularly active section of the fault that moves regularly. But it does not produce large earthquakes.

Instead, it moves in modest increments by a process called creep, in which the two sides of the fault slide slowly past one another, accompanied by occasional small quakes, most of which are not felt at the surface.

One of the big questions the researchers are working to answer is how, when most of the fault moves in violent, episodic upheavals, there can be a section where the same massive tectonic plates seem, by comparison, to gently tiptoe past each other.

"There have been many theories about why the San Andreas Fault slides along so easily, none of which could be tested directly until now," Hickman said. Some posit the presence of especially slippery clays, called smectites. Others suggest there may be water along the fault plane, lubricating the surface. Still others note the presence of a mineral called serpentine exposed in several places along the surface trace of the fault, which--if it existed at depth--could both weaken the fault and cause it to creep.

In 2005, when the SAFOD drill pierced the first zone of active faulting, mineralogist Diane Moore of the USGS detected talc in the rock cuttings brought up to the surface. This finding was published in the Aug. 16, 2007, issue of the journal Nature.

"Talc is one of the slipperiest, weakest minerals ever studied," Hickman said.

Might this mineral be smoothing the way for the huge tectonic plates? Chemically, it's possible, for when serpentine is subjected to high temperatures in the presence of water containing silica, it forms talc.

Serpentine might also control how faults behave in other ways. "Serpentine can dissolve in ground water as fault particles grind past each other and then crystallize in nearby open pore spaces, allowing the fault to creep even under very little pressure," Hickman said.

The SAFOD borehole cored into two active traces of the fault this summer, both contained within a broad fault "zone" about 700 feet wide. The deeper of the two active fault zones, designated 10830 for its distance in feet from the surface as measured along the curving borehole, yielded an 8-foot-long section of very fine-grained powder called fault gouge.

Such gouge is common in fault zones and is produced by the grinding of rock against rock. "What is remarkable about this gouge is that it contains abundant fragments of serpentine that appear to have been swept up into the gouge from the adjacent solid rock," Hickman said. "The serpentine is floating around in the fault gouge."

The only way to know what role serpentine, talc or other minerals play in controlling the behavior of the San Andreas Fault is to study the SAFOD core samples in the laboratory.

The second fault zone, called 10480, contains 3 feet of fault gouge. It also produces small earthquakes from a location 300 feet below the borehole. "Remarkably, we observe the same earthquake rupturing at the same spot on the fault year after year," Ellsworth said. This repeating earthquake, always about a magnitude 2, will be the focus of the observatory to be installed inside the fault in 2008.

Sensitive seismometers and tiltmeters to be installed in the SAFOD borehole directly above the spot that ruptures will observe for the first time the birthing process of an earthquake from the zone where the earthquake energy accumulates. Preliminary observations made in 2006 already have revealed the tiniest earthquakes ever observed--so small they have negative magnitudes.

In addition to funding from NSF, USGS and Stanford University, the SAFOD project has also been supported by the International Continental Drilling Program.