Scientists to Sick Plants: Take Two Doses of an Aspirin-Like Hormone and Call Me in the Morning

Discovery could lead to development of crops with enhanced yield, heightened immunity and reduced need for pesticides 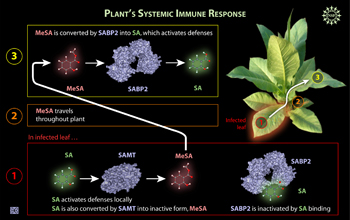 The illustration depicts steps involved in the development of a systemic immune response in plants.

Scientists have finally identified a key component in the disease-fighting process in plants that activates plant-wide defenses after a pathogen attack.

It has long been known that plants often develop a state of heightened resistance, called systemic acquired resistance, following pathogen infection; this phenomenon requires the movement of a signal from the infected leaf to uninfected parts of the plant. Until now, however, no one knew what that signal was.

Now, researchers at the Boyce Thompson Institute for Plant Research (BTI) have identified methyl salicylate (MeSA), an aspirin-like compound, as a signal that alerts a plant's immune system to shift into high gear. This research, which was funded by the National Science Foundation (NSF), is published in the Oct. 5, 2007, issue of Science.

"Now that we have identified a signal that activates defenses throughout the plant, as well as the enzymes that regulate the level of this signal, we may be able to use genetic engineering to optimize a plant's ability to turn on those defenses," said Daniel F. Klessig of BTI, who heads the research team. "This approach could boost crop production and reduce the use of pesticides, which are potentially harmful to people and/or the environment."

Previous studies conducted by the BTI researchers and others had revealed that after a plant is attacked by a pathogen, it produces a disease-fighting hormone called salicylic acid (SA) at the infection site. Some of this SA activates defenses locally, and some of this SA is converted to MeSA, which is biologically inactive since it cannot induce immune responses.

The BTI researchers' most recent study builds on their previous studies by showing that the MeSA produced at an infection sites plays a critical role in the plant's development of systemic acquired resistance. According to this study, MeSA flows from the infection site through the plant's food-conducting tubes (or phloem) to uninfected tissue. Once the MeSA reaches this uninfected tissue, an enzyme known as salicylic acid-binding protein 2 (SABP2) converts the MeSA back into SA. Through this mechanism, "SA is distributed all over the plant, and thereby induces a plant-wide defense response," said Klessig.

The BTI team's conclusions are based on analyses of plants in which SABP2 function was normal, silenced or mutated in different parts/tissues of the plant. These analyses identified the following steps, which also are shown in the figure, for the development of systemic acquired resistance:

In addition to improving our understanding of systemic acquired resistance, "this research provides insights into how a hormone like SA can actively regulate its own structure--and thereby determine its own activity--by controlling the responsible enzyme," noted Sang-Wook Park, the study's lead author.