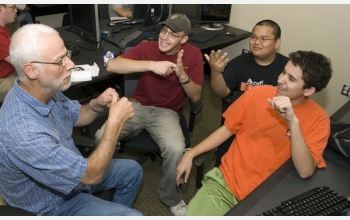 This summer a group of college-age students traveled to Seattle to work on projects such as creating complex computer animations and other high-tech challenges. These activities may sound like many computer science summer programs that take place at elite engineering schools and universities, but this program was truly unique--all of the students were deaf or hard of hearing.

The first annual Summer Academy for Advancing Deaf and Hard of Hearing in Computing, created by the University of Washington's Alliance for Access to Computing Careers initiative, drew 10 talented deaf or hard of hearing students from around the country. The intensive nine-week program, sponsored by the National Science Foundation (NSF), is part of the Alliance's efforts to increase the number of deaf students pursuing degrees and careers in computer science.

Some of the students were relatively new to computer science, while others, like Rochester Institute of Technology student Jason Schwebke, were already majoring in the field. The instructors, who were not deaf, were able to communicate with the students through sign language interpreters and real-time captioning systems that relayed their lessons. They also had help from a deaf teaching assistant who is working toward his doctorate in computer science. Although participation for the program was free, the students were selected through a competitive process based on their skills in math, science and recommendations from their instructors and professors.

The academy mixed class room lectures, hands-on programming and field trips to give the students broad exposure to the field of computer science and to show them the possibilities that await them after they finish their undergraduate studies.

Program coordinator Rob Roth explained that deaf and hard of hearing students have traditionally missed out on the more challenging and exciting aspects of computer science. Too many times, Roth says, when these students show interest in computers "they're told about repairing computers. And there is so much more they could get involved in."

In addition to taking college-level computer programming courses for credit, the students also visited several of the Seattle area's high-technology companies, including Adobe, Boeing and Microsoft. In addition, several deaf and hard of hearing computer professionals visited the program and became role models for the students.

Schwebke said it was inspiring to learn that there are deaf employees at such world-famous tech giants, and he appreciated learning about "their educational backgrounds and the path they took to accomplish their goal. It was a valuable experience to have." Schwebke also said that he was "stunned with the challenges in the programming courses" offered at the academy, which changed his approach to programming. He added that he learned a great deal about teamwork, accepting criticism and meeting deadlines, valuable skills for any young scholar.

The academy's participants formed teams to develop short animated films. The teams presented their films during a screening session toward the end of the nine-week program.

The program will begin accepting applications for its 2008 program in November 2007. Deaf, hard of hearing or deaf-blind students with a strong interest in computer science and who are either entering college or in their freshman, sophomore or junior years are encouraged to apply.

Schwebke is glad he took participated. "The program reinforced my decision to pursue a bachelor's degree in computer science."