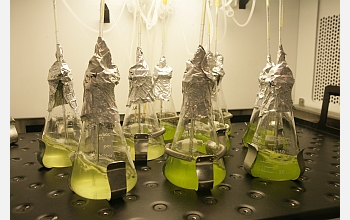 Biologists have sequenced much of the genome of Chlamydomonas reinhardtii, a green alga.

More than 100 scientists have reported an analysis of the genome of the green alga Chlamydomonas reinhardtii in the October 12 issue of the journal Science.

Chlamydomonas has long been a darling of the research lab. Its relative adaptability and short generation time (about 5 hours) have made it an important model organism for biological research.

Chlamydomonas's estimated 15,000 genes contain a wealth of information about the ancestry of plants and animals.

"Looking at the Chlamydomonas genome is like being in a candy store of thought," said Arthur Grossman, a plant biologist at the Carnegie Institution of Washington and a co-author of the Science paper. "From these analyses we're learning about the progenitor organism of animals and plants, the evolution and function of flagella, and how the different proteins in these structures relate to human diseases.

"We've also been able to identify classes of genes with unknown functions that are likely critical for photosynthesis."

"Using comparative genomics to understand evolutionary relationships, especially those of the earliest ancestors of living organisms, is fundamental, exciting research," said James Collins, NSF assistant director for biological sciences. "The genome-enabled investigation of how an organism adapts to its environment, and how it communicates and competes with other organisms in the same community, impacts our understanding of basic biological principles. An understanding of those basic principles ultimately may be applied in a wide array of areas in biotechnology."

The scientists explored the evolutionary history of Chlamydomonas and its relationship to other organisms by comparing its genes with those of species from across the biological spectrum.

The scientists identified protein families that are shared by Chlamydomonas, flowering plants, and other algae, but are not present in non-photosynthetic organisms. This enabled the researchers to recognize widely conserved photosynthesis-related proteins.

New proteins were identified in Chlamydomonas that are likely associated with flagella or the very similar cilia--thin organelles found in cells that provide locomotion and allow cells to sense their environment. Differentiated proteins that are critical for movement were also found in the alga, in addition to those associated with sensory functions.

Cilia are required for brain function and metabolism in animals. Humans have cilia in the brains, lungs and kidneys.

Loss of cilia leads to serious diseases, although scientists do not yet know why, said biochemist Sabeeha Merchant of UCLA. Chlamydomonas is ideal for discovering how cilia work, she said, and what goes wrong when they don't function properly.