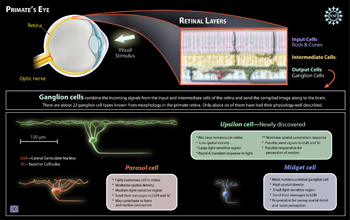 A graphic showing the eye, the retina with three layers and three types of retinal ganglion cells.

Scientists are one step closer to understanding how the retinas of humans and primates turn incoming light into coded messages communicated to the brain. A team of researchers funded by the National Science Foundation (NSF) recently reported their discovery of a type of cell in the output (ganglion cell) layer of the retina that likely plays a key role in transforming visual images, received by the rods and cones, into coded messages headed to the brain. Ultimately, their research could help guide the design of devices to provide artificial sight to the blind.

The research paper by Alan Litke, adjunct professor of physics at the University of California at Santa Cruz, and his colleagues at the same university and the Salk Institute in La Jolla, Calif., appeared recently in the Journal of Neuroscience.

The retina is an exquisitely complex and sophisticated image detector that converts incoming light from an image in the environment into a set of highly processed sub-images. The retinal cell type discovered by the researchers was first observed more than 40 years ago in other animals. Scientists have been looking for its counterpart in primates ever since.

"To find these cells after so many decades of searching is truly a stunning achievement," said NSF Program Director Krastan Blagoev. "The discovery was made by a multidisciplinary team of physicists and neuroscientists working together on the problem. These results highlight the importance of supporting a cross approach when investigating complex biological processes."

Litke said the work had been a "fantastic journey through high-energy physics, neurobiology, technology and human health." Litke and his team started out developing instruments to look for the fundamental particles of the universe such as the top quark and the Higgs boson. They soon realized they could apply some of those technological concepts to studying neural systems. "Now we are using the new technology for experiments that will help guide the design of future retinal prosthetic devices."

Scientists know that at least 22 anatomically distinct types of retinal ganglion cells exist in the primate retina. Knowing the physiological properties of these ganglion cells is essential to understanding how a primate's visual system functions. Only a handful of these cells have been studied in detail so far. Using their newly developed multielectrode array system for large-scale recording of neural activity, the researchers discovered a physiologically distinct population of ganglion cells which they have named "upsilon cells."

Their qualities suggest they may contribute to the perception of motion. Litke believes the upsilon cells went undetected by traditional physiological techniques for so long because they are a tiny fraction of the million ganglion cells in the primate retina. With their 512-electrode array, Litke and his colleagues plan to search for other unknowns.

The project was funded by the NSF Division of Physics through a continuing grant to study how the retina processes and encodes visual images.