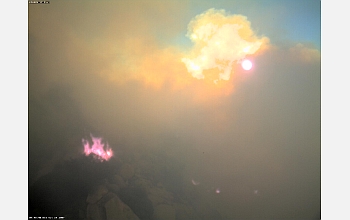 This image was captured from the top of Lyons Peak, during the height of the Harris fire.

Video and still images captured in real time have informed fire crews and local residents in the San Diego area about the location and severity of threats to life and property since fires broke out earlier this month. Accident investigators from the California Department of Forestry and Fire Protection (CAL FIRE) have requested these images that were captured by the National Science Foundation (NSF)-supported High Performance Wireless Research and Education Network (HPWREN).

Perched on mountains and bluffs overlooking the greater San Diego area, HPWREN's remote cameras have served as constant eyes in the sky, even as fires engulfed the towers on which they stood, making the situation too hazardous for human observers. These real-time cameras provide CAL FIRE and other local fire crews with a commanding view of fires as they happen, confirming fire situations on remote mountaintops saving valuable time and personnel.

Hans-Werner Braun, director of HPWREN at the University of California, San Diego, whose own family was forced to evacuate, continues to monitor the network's cameras to watch workers extinguish the fire.

"The HPWREN real-time cameras tell us what is happening before engines or chiefs can get there," says CAL FIRE Emergency Command Center Chief Tom Gardner. "They tell us clearly where to go when we are getting swamped with locals calling it in."

Chris Hinshaw, manager of the San Diego County Sheriff's Department's wireless communications office, further described the cameras' contributions as "especially helpful as they are set up with a 360-degree view from each site in small thumbnails so you can browse quickly. We were also able to estimate potential damage to our radio site by observing the fire as it moved through the facilities, and observe remedial actions such as fuel deliveries for our generators using the cameras. They are a force multiplier for us."

In addition to CAL FIRE, rural communities in the greater San Diego area created blogs that point residents to HPWREN cameras, enabling residents to check the whereabouts of blazes and acquire related information not otherwise available from traditional media.

The Lyon's Peak cameras have been especially useful for people in the Jamul community, who monitored camera footage through their neighborhood blog.

"I've heard from many Jamulians about the cameras, all with basically the same message: the cameras were what kept them sane. They were the only reliable source of information about where the fire was burning," said local resident Tom Dilatus. "It was extremely comforting to see the tiny stationary lights of what we guessed were fire engines stationed along Sierra Cielo and the dirt road to the east of our property as the flames came through last night. At least we knew that the necessary forces had been deployed."

The goal of the HPWREN project is to demonstrate and evaluate a non-commercial, prototype, high-performance, wide-area wireless network in San Diego and Riverside counties. The network includes backbone nodes on the San Diego Supercomputer Center and San Diego State campuses and a number of hard-to-reach areas in remote environments. It hosts the HPWREN servers and provides for its Internet connectivity, supporting the access to the camera images fore more than 10,000 users during the fires, at more than 10 gigabytes a day. On Oct. 25, downloads from one server alone added up to more than 70 gigabytes of data.

In addition to assisting state and local authorities with wireless networking technologies during emergencies, HPWREN is used for network analysis research and provides high-speed Internet access to field researchers in geophysics, astronomy and ecology as well as educational opportunities for rural Native American learning centers and schools.