New Planet Discovered Around Nearby Star 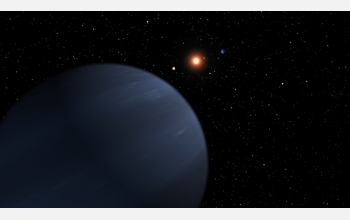 This artist's concept shows four of the five planets that orbit 55 Cancri, a star much like our own.

Astronomers funded in part by the National Science Foundation (NSF) today announced their discovery of a fifth planet around the nearby star 55 Cancri, making it the only star aside from the sun known to have five planets.

The research results have been accepted for publication in the Astrophysical Journal. Lead author Debra Fischer, assistant professor of astronomy at San Francisco State University, said the fifth planet is within the star's habitable zone, in which water could exist as a liquid. Although the planet is a ball of gas, liquid water could exist on the surface of a moon or on other rocky planets that may yet be found within the zone.

"This work marks an exciting next step in the search for worlds like our own," said Michael Briley, astronomer and director of the stellar astronomy and astrophysics program at NSF. "To go from the first detections of planets around the sun-like stars to finding a full-fledged solar system with a planet in the habitable zone in just 12 years is an amazing accomplishment and a testament to the years of hard work by these investigators."

The unique 55 Cancri system, located 41 light-years away in the direction of the constellation Cancer, resembles our own solar system with a clutch of four inner planets and one giant outer planet, although it's missing an Earth or Mars.

Co-author Geoffrey Marcy, a professor of astronomy at University of California, Berkeley, said the planets around 55 Cancri are not a twin of our solar system because the four planets next to the star are all the size of Neptune or bigger, but he's optimistic that continued observations will reveal a rocky planet within five years.