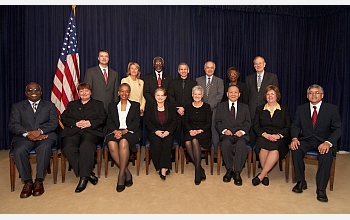 The value of mentoring in developing the scientists of the future was at front and center with the latest Presidential Awards for Excellence in Science, Mathematics and Engineering Mentoring (PAESMEM), a program supported and administered by the National Science Foundation (NSF).The winners of the 2006 competition -- comprising 10 individuals and one organization and representing a number of scientific disciplines -- were announced at the White House on Nov. 16.

Since 1996, these awards have been made annually to recognize the critical importance of mentors in the academic and personal development of students and colleagues who are underrepresented in the fields of science, technology, engineering and mathematics (STEM). Each year's awardees add to a widening network of outstanding mentors in the United States, so that tomorrow's scientists and engineers can better reflect the nation's diverse population.

Awards are made to individuals who have demonstrated outstanding and sustained mentoring and guidance to a significant number of underrepresented students at the K-12, undergraduate, or graduate education level; or organizations that, through their programming, have enabled a substantial number of students who are traditionally underrepresented in the STEM fields to pursue and complete relevant degree programs. Nominations are made by colleagues, administrators and students from the nominee's organization, which must be eligible to be a NSF award grantee.

Beyond being honored at a White House ceremony, awardees receive a grant of $10,000 to continue and advance their mentoring work. To date, 178 individuals and organizations have been recognized through PAESMEM. A list of the 2006 winners follows.

David B. Allison, professor of biostatistics and nutrition sciences at the University of Alabama at Birmingham, operates broad and interdisciplinary scientific programs that include statistical genetics, clinical nutrition research, genomics, obesity and longevity. Underrepresented trainees are attracted to Allison's academic research areas because of the high visibility of the subject matter and because of the disproportionate prevalence of obesity and related co-morbidities currently evidenced in the African American community as compared to other ethnic groups. Beyond his professional accomplishments and scientific leadership in his field, Allison has mentored 64 scientists, the majority of them from underrepresented groups.

Juan F. Arratia, is director and principal investigator for the Model Institutions for Excellence (MIE) project at Universidad Metropolitana (Puerto Rico). MIE is a program funded by NSF and the National Aeronautics and Space Administration (NASA), which, over the past 11 years, has demonstrated successful strategies for recruiting underrepresented minority students to science and engineering fields and supporting their successful completion of science degrees. At Universidad Metropolitana, Arratia has recruited unprecedented numbers of Hispanic students into STEM fields; increased the retention of STEM majors from the freshman to sophomore year; and given these students comprehensive career advising. Among the help he has provided to more than 500 undergraduate Hispanic STEM students and more than 1800 pre-college Hispanic students is providing them with summer research experiences in the U.S. and abroad.

Frances A. Draughon is professor and co-director of the Food Safety Center of Excellence at the University of Tennessee's Institute of Agriculture. She was nominated for the award for demonstrating a sustained commitment to mentoring young scientists for more than 20 years, and has also mentored and trained women and other minorities to take leadership roles in the fields of science, engineering and mathematics. Draughon's activities include recruiting and hiring undergraduate and graduate women and minority students to work in the laboratory to increase their interest in research and to acquire the skills to conduct their own research projects; and introducing them to key professionals in the field of food microbiology and food safety at professional meetings.

Jonathan F. K. Earle is associate dean for student affairs and associate professor of agricultural and biological engineering at the University of Florida. He has participated in the University of Florida Minority Mentor Program for the past 18 years, and has started new mentoring programs in the college of engineering to attract and retain pre-college students and undergraduates in the field of engineering. Among these, the Successful Transition through Enhanced Preparation for Undergraduate Programs (STEPUP), a transition program for entering minority engineering undergraduate students, became the model for a university-wide program established to address the needs of incoming African-American freshmen across the campus.

Ricardo B. Jacquez, professor of civil engineering at New Mexico State University, has mentored and served as a role model for hundreds of students for more than two decades. As Louis Stokes Alliance for Minority Participation (LSAMP) director at New Mexico State, he has earned a reputation for providing new research activities for community college students, and for giving high school students from underrepresented groups reasons to aspire to STEM study in their postsecondary education. Jacquez has had a role in building professional learning community partnerships in K-12, community colleges and undergraduate and graduate programs. He involves students in research, develops their critical thinking and communications skills, and exposes them to activities and experiences that contribute to their workforce readiness or preparation for graduate studies. Since New Mexico LSAMP's inception in 1993, STEM degree awards have increased from 253 in l992-93 to 580 in 2003-04. Over the same period, the percentage of baccalaureate degrees awarded to underrepresented students has increased from 24 percent to 42 percent.

George C. Lee is Samuel Capen Professor of Engineering, and former dean of the school of engineering and applied sciences at the University at Buffalo, State University of New York (SUNY). He has internationally recognized scholarship and leadership in multidisciplinary earthquake engineering, and is a leader in providing and sustaining educational opportunities in engineering. For nearly 40 years his mentoring efforts have led to thousands of underrepresented high school students in the greater Buffalo area being exposed to engineering and science. Once underrepresented students are enrolled in the School of Engineering and Applied Sciences, Lee continues mentoring to encourage student success during the undergraduate engineering experience. Lee has also served as the principal advisor for a large number of underrepresented graduate students. He was the principal founding member of BEAM, Buffalo Area Engineering Awareness for Minorities, an organization whose membership draws on Omega Psi Phi, a black professional men's' national fraternity, and the Buffalo City Schools in addition to the SUNY Buffalo population. Lee has designed, developed and obtained funding for a wide variety of highly effective mentoring programs, including research internships for students in grades 5-12 and their teachers; community programs; and leadership training programs.

Saundra Y. McGuire, associate dean for University College at Louisiana State University, has been mentoring students since she was a teaching assistant (TA) in her first year of graduate school. Early on, as an undergraduate starting college, she experienced a lack of preparedness for a chemistry class. With the help of another student, she was tutored and made an "A" in the course. Subsequently, she realized that her success in chemistry had depended upon understanding fundamental concepts. As a TA for an introductory chemistry course, she helped her students develop a conceptual framework for the material. Since then, her 35-year academic career has been focused on mentoring and teaching others how to mentor and how to learn. McGuire has authored at least five publications on mentoring minority students in science and has presented those papers at a variety of Chemical and Physics society conferences. The publications include resource and study guides for faculty and students.

Joe Omojola, dean at the College of Science at Southern University of New Orleans (SUNO) is well-recognized on campus and in the Gulf area, having committed himself to the instruction and mentoring of students many years ago. He has had success in developing both undergraduate and graduate students as a part of the Louis Stokes Alliance for Minority Participation (LSAMP) and other programs. He has helped lead SUNO's math and physics program over the last decade, and has been a positive force in the New Orleans area public school system. Following the disruption brought about by Hurricane Katrina, he has been seeking to build mentor support at area elementary schools. Given the depth of infrastructural damage, tangled governance systems, continuing chaos and losses caused by the storm, he is moving ahead to fill one of the all-too-many critical voids that confront the remaining citizens of New Orleans.

Gayle R. Slaughter, assistant dean for graduate education at Baylor College of Medicine, pioneered the college's Summer Medical Research and Training (SMART) program, which has enrolled between 80-100 students each summer over the past 16 years. During that time, 439 underrepresented minority students have participated. Slaughter has been a leader in Baylor's College of Medicine's (BCM) success in recruiting and retaining graduate students, especially from underrepresented groups, and her work with the SMART program has more than tripled the number of minority Ph.D. students achieving success at BCM. Overall, she has mentored more than 500 minority students. Slaughter has also established collaborations with the United Negro College Fund to increase interest in molecular biology among K-12 students.

Judith A. Todd, professor of engineering science and mechanics at Pennsylvania State University, has a track record in mentoring women engineers at all levels in their careers. Todd is P. B. Breneman Department Head Chair of Engineering Science and Mechanics, the first female engineering department chair at Penn State. Beyond her mentoring of individual students and faculty, Todd has been an administrator at another major technical institution, and has developed and implemented several programs to institute gender equity and salary parity. At Penn State, she has engaged the university's senior leadership in institutionalizing her "Strategic Pathways to Equity and Leadership (SPEL): Preparing for the Professoriate" program. It requires mentoring aspiring and current faculty members about the importance of the search, recruitment, advancement opportunities, recognition, and promotion and tenure practices, as leadership opportunities in their careers. Penn State now ranks second nationally in the numbers of women faculty in engineering.

The Ecological Society of America (ESA) anchors its initiatives and programs in a holistic and co-mentoring approach to developing the diversity of its national membership. ESA is the nation's leading professional society of ecologists, representing more than 9200 scientists, educators, researchers, policymakers, and managers from the U.S. and more than 80 other nations. ESA's Strategies for Ecology, Education, Development and Sustainability (SEEDS) program is designed to stimulate and nurture the interest of underrepresented students by providing a full spectrum of mentoring and learning opportunities including group field trips, undergraduate research, and travel to ESA annual meetings, where students are mentored. A decade ago, ESA created the SEEDS program to strategically plant resources and support to minority serving institutions to vastly improve the numbers of minorities in ecology. ESA's diversity initiatives impact not only the students and faculty but the overall profession as the organization has identified diversity as critical for advancing science. Today, the organization has grown to include 32 ecology chapters on campuses nationwide; has developed seven new ecology-related courses, minors or majors on campuses where ecology was, in some cases not offered at all previously; and has sponsored nine field trips involving more than 146 students. The minority membership of ESA has doubled since 1996 as a result of the concerted efforts of SEEDS.