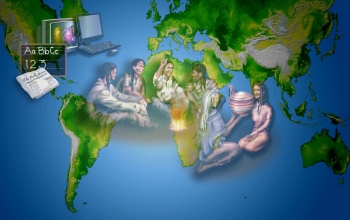 After funding more than $10 million dollars of scientific research and study projects during the last three years to record and analyze some of the world's most endangered languages, the National Science Foundation (NSF) recently made its Documenting Endangered Languages (DEL) initiative a permanent program.

The program was established in NSF's social, behavioral and economic sciences directorate in 2005. It was part of a collaborative arrangement with the National Endowment for the Humanities as a funding partner and the Smithsonian Institution as a non-funding partner.

"By making this a permanent program, NSF is acknowledging both that these efforts have been successful and that much remains to be done," said Douglas Whalen, the program's director at NSF. "Of the 6,500 or so languages that are spoken today, fewer than half are expected to survive the century. The world could lose 3,000 languages in the span of 100 years. Many of them are virtually unrecorded, and all have unique linguistic aspects that will be unrecoverable in the near future."

But new technologies provide hope for linguists, giving them a greater ability to preserve language in a more complete and permanent way.

For the first time in history, researchers can digitally record many of these languages, and new developments in cyberinfrastructure make it possible for the original language material to be accessible to linguists and native speaker communities over the Internet, a capability that did not exist until quite recently.

Whalen says linguists are redoubling their efforts to document endangered languages because time is short. More than 70 languages have received attention through grants from the DEL program.

"While this is a promising beginning, there are many languages still in need of further documentation," said Whalen. "With a permanent program backing up this work, the field of linguistics can expect to do a better job of recording this uniquely human heritage for future scientists and language users."