Newly Unveiled Satellite Map of Antarctica Is a Unique Tool for Scientists, Educators and the Public 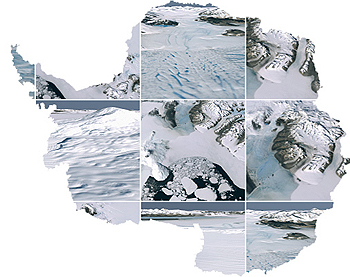 For b-roll of Antarctica, contact Dena Headlee at dheadlee@nsf.gov.

Three federal agencies and the British Antarctic Survey (BAS) today unveiled a uniquely detailed and scientifically accurate satellite mosaic map of Antarctica that is expected to become a standard geographic reference and will give both scientists and the general public an unmatched tool for studying the southernmost continent.

The new map was introduced to the media and public during an event at NASA's Goddard Space Flight Center in Greenbelt, Md.

At a moment in history when there is unprecedented concern about the state of the polar ice caps in the face of documented regional Arctic and Antarctic warming trends, the LIMA mosaic provides a critical "snapshot in time" of of Antarctica's ice sheets, which contain over 60 percent the world's fresh water, noted Scott Borg, director of NSF's division of Antarctic sciences.

"But LIMA is also a fundamental tool for scientists. It will be used in every discipline from biology to geology to glaciology, both to answer scientific questions and plan fieldwork in the vast unexplored tracts of Antarctica. For educators, students, and the general public, LIMA will bring to life the Antarctic continent like nothing before it," Borg said. "Imagine a middle-school Earth-science student comparing landforms in the glaciated valleys of Antarctic to similar features in the Rocky Mountains or even comparing a rock glacier in Antarctica with some of the features scientists are studying in images from Mars."

"This mosaic draws on 35 years of experience by the USGS's Earth Resources Observation and Science (EROS) center, whose goals include the preservation of and access to the Nation's remotely sensed land data assets through the National Satellite Land Remote Sensing Data Archive," said Barbara Ryan, USGS associate director for geography. LIMA was produced using EROS images from the Landsat 7 satellite launched in 1999.

Robert Bindschadler, chief scientist of the Hydrospheric and Biospheric Sciences Laboratory at Goddard, noted that the new mosaic is the most detailed map of the continent in existence and offers the most geographically accurate, true-color views of the continent possible. "This innovation, compared to what we had available most recently, is like watching the most spectacular high-definition TV in living color versus watching the picture on a small black-and-white television,"he said.

"LIMA represents the true spirit of the IPY in two ways," Wagner said. "Firstly, it's an international collaboration between the U.S. and the United Kingdom, and secondly, the map and raw data are freely available to the world community of scientists, educators, and the general public."

IPY is a coordinated international field campaign that began in March 2007. During IPY, hundreds of scientists from more than 60 nations will deploy to the Arctic and Antarctic to study a range of disciplines. IPY marks the beginning of a sustained effort to understand large-scale environmental change in the Earth's polar regions. NSF is the lead U.S. agency for IPY.

Wagner added that apart from the international collaboration with the British Antarctic Survey, the project is a major interagency collaborative, with both USGS and NASA playing unique and key roles in bringing the map into existence, and that the LIMA project grew out of a "grassroots" scientific consensus across the government that the project had merit.

Two researchers, Jerry Mullins, at USGS, and Bindschadler, at NASA, he added, were instrumental in LIMA's development.

"Recognizing that change was afoot in the mapping community, Jerry Mullins, with NSF's support, organized a meeting of Antarctic researchers to determine their needs for information about Antarctica. And it quickly became apparent that LandSat imagery had great potential but needed to be shaped into a new map for its potential to be realized," Wagner said.

Wagner said that "Bob Bindschadler had the foresight many years ago to convince NASA that the Landsat satellite should collect data over Antarctica. His group also picked all of the images that make up the mosaic. It wasn't easy work; many thousands of scenes were considered and rejected. New techniques to interpret the data were also developed by Bob's group just for this project."