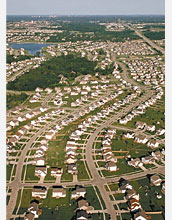 The data are in. Divorce is bad for the environment.

A novel study that links divorce with the environment shows that a global trend of soaring divorce rates has created more households with fewer people, that, in turn, take up more space and gobble up more energy and water. The research of Jianguo "Jack" Liu and Eunice Yu at Michigan State University, which was partially funded by the National Science Foundation, appears in this week's online edition of the Proceedings of the National Academy of Sciences.

A remedy to counter the statistics: Fall back in love. Cohabitation means less urban sprawl and softens the environmental hit.

"Not only the United States, but also other countries, including developing countries such as China and places with strict religious policies regarding divorce, are having more divorced households," Liu said. "The consequent increases in consumption of water and energy and using more space are being seen everywhere."

Liu and his research assistant, Yu, started with the obvious--that divorce rates across the globe are on the rise. Housing units, even if they have few people in them, require resources to construct them and the units take up space and require fuel to heat and cool them. Within a unit, a refrigerator uses roughly the same amount of energy whether it belongs to a family of four or a family of two.

When Liu and Yu calculated the cost in terms of increased utilities and unused housing space per capita, they discovered that divorce eliminates economies of scale. Among the findings:

To track what happens when divorced people returned to married life, the study compared married households with households that had weathered marriage, divorce and remarriage. The results: The environmental footprint shrunk back to that of consistently married households.

Liu, a university distinguished professor and Rachel Carson Chair in Sustainability at MSU's Center for Systems Integration and Sustainability, has spent more than two decades integrating ecology with social sciences to understand the complex interrelationships between nature and humans and how those interactions affect the environment and biodiversity. Liu and Yu began to discuss this research project when Yu was a high school student.

This new work also acknowledges that divorce is not the only lifestyle trend changing family living structures: Other examples include the demise of multigenerational households and the incidence of people remaining single longer.

"People's first reaction to this research is surprise, and then it seems simple," Liu said. "But a lot of things become simple after research is done. Our challenges were to connect the dots and quantify their relationships. People have been talking about how to protect the environment and combat climate change, but divorce is an overlooked factor that needs to be considered."

"Solutions are beyond a single idea," Liu said. "Consider the production of biofuel. Biofuel is made from plants, which also require water and space. We're showing divorce has significant competition for that water and space. On the other hand, more divorce demands more energy. This creates a challenging dilemma and requires more creative solutions."