All 10 passengers and crew aboard uninjured; plane severely damaged 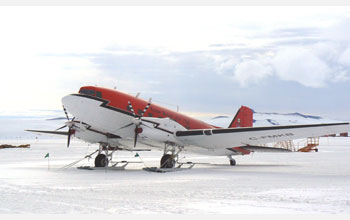 A DC-3T at McMurdo Station, Antarctica in January 2007

A National Science Foundation (NSF)-chartered aircraft operating in Antarctica crashed shortly after take-off earlier this week while providing support to a group of researchers at a remote location on the southernmost continent. None of the 10 people aboard was injured, but the DC-3 Basler was severely damaged.

The aircraft, which is owned by Kenn Borek Air Ltd., a Canadian aviation firm, experienced difficulties in taking off from a field site near Mt. Patterson in West Antarctica on the morning of Dec. 20, local time (U.S. stations in Antarctica keep New Zealand time), roughly 550 miles from McMurdo Station, NSF's logistical hub in Antarctica.

The six passengers aboard the plane were part of the NSF-funded portion of the international Polar Earth Observatory Network (POLENET) project, which is deploying GPS units and seismic sensors across Antarctica to make observations that are vital to understanding how the massive ice sheets are changing. In turn, these measurements are critical to understanding how ice sheets affect sea level worldwide, and thereby global climate in general.

The POLENET team and four aircraft crewmembers were flown back to McMurdo Station.

As a matter of routine, the incident is under investigation by the Department of the Interior's Aircraft Management Division (AMD). NSF has a memorandum of agreement with the Interior Department to conduct such investigations. As the managing federal agency for the U.S. Antarctic Program, NSF coordinates and supports all U.S. scientific research on the southernmost continent and in surrounding waters.

Because the cause of the accident is under investigation, NSF will have no further comment, pending the conclusion of that investigation.