Three flights in the air simultaneously over the southernmost continent 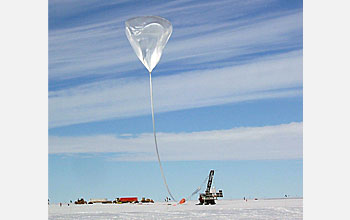 The Cosmic Ray Energetics And Mass (CREAM) payload is launched.

For b-roll of Antarctic balloon launches in the Betacam SP format, contact Dena Headlee, (703) 292-7761, or dheadlee@nsf.gov.

The National Science Foundation (NSF) and the National Aeronautics and Space Administration (NASA) have jointly achieved a new milestone in the almost 20-year history of scientific ballooning in Antarctica, by launching and operating three long-duration sub-orbital flights within a single Southern-Hemisphere summer.

Scientists from the United States, Japan, South Korea, France and other international collaborators concurrently are using high balloons to investigate the nature of ultra-high-energy cosmic rays and searching for anti-matter, as air currents that circle Antarctica carry the balloons and their instruments at the edge of space.

The ability to launch and operate three balloon payloads over Antarctica is the result of a partnership between NASA and NSF, which provides logistic support for all U.S. scientific operations in Antarctica. NSF facilitated the launches near McMurdo Station, its Antarctic logistics hub, and will recover the payloads after the flights.

Karl A. Erb, who heads NSF's Office of Polar Programs, noted that the flight record, while significant itself, is one aspect of wider cooperation in the polar regions between NSF, which manages the U.S. Antarctic Program, and the space agency. "This annual scientific balloon expedition demonstrates the deep commitment and very fruitful collaboration between NASA and the NSF that enables a wide variety of forefront scientific research in Antarctica," he said. "Just as NSF provided the infrastructure and logistics support that made this hat trick possible, NASA provides the satellite communications link that is the lifeblood of astrophysics research at our new research station at the South Pole. Our partnership benefits both agencies and more importantly, the U.S. Science community.

"This collaboration began in 1989, initially with one balloon launch every other year, turning very soon to every year, then increasing to two launches per Antarctic summer at the end of 1990s and beginning of this decade. Demanding science and excellent atmospheric conditions over the Antarctica in the austral summer led our two agencies to sign an agreement in 2003 aimed at increasing the launch tempo to three balloons per season. With modest investments but considerable effort by both agencies, this goal is now achieved," Erb added.

Erb also noted that the milestone is particularly significant, as it occurs during the height of the International Polar Year (IPY), a coordinated scientific campaign that is engaging scientists from more than 60 nations. NSF is the lead federal agency for IPY, which began in March 2007 and will continue until 2009 to allow for two full years of observations and field work in parts of the world that are generally uninhabitable for as long as six months each year.

W. Vernon Jones, senior scientist for suborbital research at NASA headquarters, added, "We are extremely proud of our crew in Antarctica, and the partnership with NSF that provides for the increased capability to support three payloads from McMurdo. This is indeed a crowning event in the exceedingly successful NSF-NASA cooperation in Antarctic long balloon flights."

Unique atmospheric circulation over Antarctica during the austral summer allows scientists to launch balloons from a site near McMurdo Station and recover them from very nearly the same spot weeks later, after the balloons have circled the continent one to three. Antarctic flights are of a long duration because of the polar vortex, a persistent, large, low-pressure system, and because there is very little atmospheric or temperature change. Constant daylight in Antarctica means no day-to-night temperature fluctuations on the balloon, which helps the balloon stay at a nearly constant altitude for a longer time. These three payloads will ride the stratospheric winds in the polar vortex above the Antarctic continent for up to six weeks.

This orbital pattern allows for very long and continuous observations of a variety of phenomena from a single instrument at a fraction of the cost of launching an orbital platform into space. Once the balloon flights are completed, the payloads will be retrieved, brought back to McMurdo, and then shipped back to the United States, where they are refurbished and then launched again.

"With the launch of the CREAM, BESS, and ATIC missions, NASA and NSF have realized a goal we have worked toward for several years in order to accomplish more science" said David Gregory, assistant chief of NASA's Balloon Program at the NASA Wallops Flight Facility in Virginia. "Having three long-duration balloon science missions flying simultaneously is a record-setting event that we in the Balloon Program and the Office of Polar Programs are very excited about. But of greater significance is that more science can be accomplished with a modest increase in cost to the program."

Each of these large-aperture instruments is similar in size to an observatory class satellite.

"The operations support for three balloons in the air at one time, and using the finest balloon vehicle made for this kind of cutting-edge scientific research is a major achievement," said Jones. "If all three of these missions achieve their flight goals, this Antarctic campaign will result in more than 90 days of near-space flight at an average altitude above about 37 kilometers [23.9 miles] with experiments averaging more than 2000 kilograms [4400 pounds]. This exposure would be equivalent to an Explorer class MIDEX mission in orbit for almost three years."

"With the launch of the ATIC instrument, our third during this campaign, we have put 32,000 pounds of hardware, including 13,000 lbs of science instruments, into near space in a span of just over a week. It's a magnificent accomplishment," said Danny Ball, site manager for New Mexico State University the operator of the CSBF for NASA. "We're extremely proud of our personnel who worked through Thanksgiving, Christmas, and New Years in harsh conditions in Antarctica to make this possible."

**For free video content from the National Science Foundation, go to http://www.thenewsmarket.com/nsf to preview and request video. You can receive broadcast-standard video digitally or by tape from this site. Registration and video is free to the media.