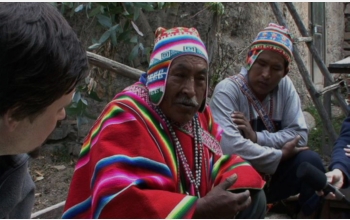 In Siberia, fewer than 25 elderly people speak Chulym, a language spoken for generations by traditional hunter-gatherers and fishermen in small rural villages. In Bolivia, a language once spoken by healers to the Inca emperor is on the verge of extinction. In the Orissa state in the east of India, younger generations no longer speak Sora, a language of the region with a complex and expressive way of putting words together.

These examples are brought vividly to life in "The Linguists," a documentary funded in part by the National Science Foundation (NSF). Producer-directors Seth Kramer, Daniel A. Miller and Jeremy Newberger of Ironbound Films accompanied scientists David Harrison of Swarthmore College and Gregory Anderson of the Living Tongues Institute on a journey to record these languages and understand the cultural and political pressures threatening their extinction.

Scientists estimate that of 7,000 languages in the world, half will be gone by the end of this century. On average, one language disappears every two weeks. The human dimension of endangered languages is brought to light in "The Linguists," which premieres at the Sundance Film Festival in Park City, Utah, on Jan. 18, 2008. The film dramatizes the kind of work involved in reaching indigenous communities and documenting their languages.

"The most surprising discovery was just how interesting and dramatic it was to follow two seemingly no-nonsense linguists--David Harrison and Gregory Anderson--into the field," says Daniel Miller, the film's producer. "The linguists first had to penetrate bureaucracies, then gain trust within communities, and finally inspire speech from people often driven into not using their native tongue by decades of persecution and shame. These challenges required skills finely honed by the linguists and made the expeditions more like adventures."

The adventures were not without risk. In India, extreme poverty in the region had sparked a violent Maoist insurgency. With its travel under strict government regulation, the group was urged by its Indian guides not to travel at night or stay in local villages, and to keep interactions with the populace to a minimum. Because the linguists' work demanded otherwise, the group was forced to take certain risks in the interest of recording endangered languages.

"The resurgence of interest among linguists in smaller languages has happily coincided with an upsurge in activism on the part of the speaker communities," says Douglas H. Whalen, program director for NSF's Documenting Endangered Languages program. "This film provides a thought-provoking sample of cooperation between these groups in the urgent task of documenting endangered languages."

In India, Siberia, and the United States, the group found confirmation of a recurring pattern: schools set up to "civilize" indigenous children had taught them the pointlessness of their native tongues and pushed them toward abandoning that language and the culture associated with it. "The Linguists" lets the communities involved speak for themselves in demonstrating the power of these forces.

"We did not want to make a movie that looked at threatened ways of life with detached sentimentality," says Miller. "We sought to portray speakers of endangered languages, and the scientists who work with them, as regular people who share a sense of urgency about losing something vital. Their stories--at times sad, scary, even hilarious--reveal how the loss of a language affects us as human beings."

"'The Linguists' is a compelling story about the causes of language loss and what scientists are doing to help maintain the languages and the cultures they support," says Valentine Kass, program director for NSF's Informal Science Education program. "We are thrilled that the quality of the production has led to its premiere at Sundance."

For more information, and to see a trailer of the film, go to http://www.thelinguists.com/