Could be produced easily and inexpensively in developing countries 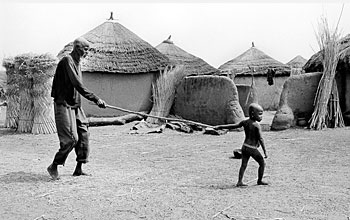 Deficiencies in dietary vitamin A can cause many diseases, including blindness.

Scientists have developed a potentially powerful new tool in the fight against deficiencies in dietary vitamin A, which cause eye diseases, including blindness, in 40 million children annually, and increased health risks for about 250 million people, mostly in developing countries.

This tool consists of "a new method of analyzing the genetic makeup of corn that will enable developing countries to identify and increase cultivation of corn that has naturally high levels of vitamin A precursors," says Ed Buckler, a co-leader of the research team from the U.S. Department of Agriculture, Agricultural Research Service and Cornell University

Corn is an essential part of the diets of hundreds of millions of people around the world, many of whom live in developing countries. Regular consumption by adults and children of adequate quantities of corn high in vitamin A precursors, which are converted in the human body into vitamin A, would reduce their chances of developing vitamin A deficiencies and associated health problems.

This new method of increasing cultivation of high-vitamin corn is designed to tap the natural genetic diversity of corn. It was developed by a team led by Buckler and Torbert Rocheford of the University of Illinois, and was partially funded by The National Science Foundation (NSF). It will be described in the January 18, 2007 edition of Science.

But the team led by Buckler and Rocheford has significantly simplified the task of sifting through that proverbial haystack. They did so by identifying genetic markers in corn that are associated with high levels of vitamin A precursors. These markers can be used by "scientists working in very basic labs in developing countries to quickly screen for local corn strains that are high in vitamin A precursors," says Buckler. Then, these high-vitamin strains may be bred, cultivated and consumed by local people.

Corn is the dominant subsistence crop in sub-Saharan Africa and Latin America, where 17 to 30 percent of children under age five are vitamin A deficient, says Buckler. Because corn is consumed for all three meals a day in much of Africa, it is a good target for vitamin biofortification, he added.

Buckler says that his team's method for analyzing the genetic makeup of corn is "much simpler and faster and up to 1,000-fold cheaper" than running the types of chemical tests that were previously available for identifying corn high in vitamin A precursors. He expects it to significantly accelerate the vitamin biofortification of corn crops.

The Buckler and Rocheford team is currently working with various international organizations, such as CIMMYT (the International Maize and Wheat Improvement Center) and the International Institute for Tropical Agriculture, to help train plant breeders in developing countries to use their techniques.

Buckler says that this new method of increasing cultivation of high-vitamin corn was made possible by recent breakthroughs in statistical analyses and the advent of rapid DNA sequencers -- instruments that are used to automate genetic profiling of crops. The researchers expect this new method to have broad applications beyond corn improvement.