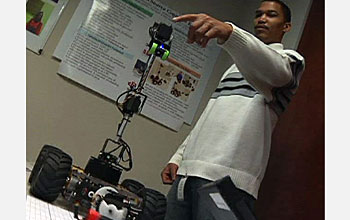 The National Science Foundation (NSF) commemorated the upcoming birthday of Martin Luther King, Jr. with a kick-off for the new Advancing Robotics Technology for Societal Impact (ARTSI) Alliance. Funded by a three-year, $2 million grant from NSF, ARTSI will develop outreach and education programs to encourage African-American students at both the K-12 and college level to pursue degrees and careers in computer science and robotics.

The event earlier this week featured demonstrations by the SpelBots, Spelman College's celebrated robotics team, a presentation of a robot designed by a University of the District of Columbia student and a keynote speech by ARTSI director Andrew Williams, a computer science professor at Spelman and founder of the SpelBots.

"Traditionally African-Americans have been left behind in emerging high tech fields, such as robotics," Williams said. "So we decided to focus our ARTSI activities around socially conscious robotics that will inspire a new generation of black robotics engineers and computer scientists."

The need for this focus is clear. Although African-Americans make up almost 13% of the population, they hold less than five percent of jobs in the computer and information sciences fields, a sector that is projected to be one of the fastest growing in the next decade.

To increase the number of African-Americans who pursue degrees and careers in these fields, ARTSI will develop outreach programs that target young people of color both before and during their college years, and institute robotics courses that allow HBCU students to do hands-on robotics research in order to spark their interest in this exciting field. ARTSI will also provide professional development activities for HBCU computer science and robotics faculty.

"Some of these schools are getting their first research-quality robots," Touretzky said, and need to develop a basic robotics curriculum. Other HBCUs like Spelman already have a robust robotics program that continues to grow through ARTSI.

Working with HBCUs is important because of the vital role they play in creating African researchers and scholars. Though they comprise only three percent of U.S. colleges and universities, they award approximately 23% of bachelors degrees earned by African. In the field of computer science, HBCUs award 35% of all degrees earned by African-Americans.

Yet building successful partnerships between major research universities and HBCUs requires new approaches, according to Jan Cuny, the program officer at NSF who oversees efforts to broaden minority participation in computer science. "Building meaningful collaborations between minority serving institutions and major research universities is difficult," Cuny said, "but this is a creative effort. It is just starting, but the faculty involved at all of the schools are terrific and the focus on robotics in service to society will, I believe, be very compelling to students."

In his keynote speech, Williams linked the work of ARTSI and other efforts to increase the number of African-American in high-tech fields with the ongoing effort to achieve Martin Luther King, Jr.'s dream of a society that provides opportunities for all of its citizens based on their abilities and character and not their ethnic or social background.

"Dr. King was a role model for bringing diverse people together to improve our society in essential civil rights," Williams said. "Through the support of NSF and other industry partners, ARTSI is bringing together a diverse community of educators and researchers to increase African Americans' educational opportunities using robotics projects centered around improving healthcare, creative arts, and entrepreneurship."

Cuny and others believe ARTSI will have a measurable impact on the education of African-American students and will produce broader benefits for society as a whole. "I have very high expectations for this project," she said.