Impact of 9/11 on school enrollment eases 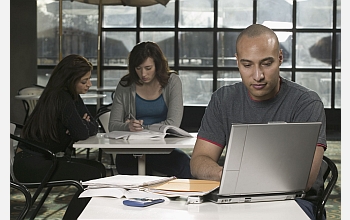 Enrollment of first-time, full-time foreign graduate students on temporary visas studying science and engineering (S&E) grew by 16 percent in 2006, following a 4 percent increase in 2005. The increases in the past two years reflect a reversal of the declines in enrollments of new foreign S&E graduate students experienced after the Sept. 11, 2001 attacks on New York and Washington, D.C.

"The numbers indicate a rebound of first-time, full-time foreign S&E enrollment in U.S. graduate schools, which declined 19 percent between 2001 and 2004 after 9/11," said Project Officer Julia Oliver, of the National Science Foundation (NSF), which cosponsored the study with the National Institutes of Health.

A variety of factors may be affecting these trends in foreign S&E graduate student enrollment, including improvements in the quality and attractiveness of S&E education in other countries as well as application and approval rates for U.S. student visas.

Total enrollment of S&E graduate students on temporary visas in U.S. universities also increased in 2006. While the growth in total enrollment was a more modest 2 percent, it represented a reversal of declines seen in 2004 and 2005. Enrollment of U.S. citizens and permanent residents also grew by 2 percent.

Despite the recent increases, both first-time, full-time and total enrollments in 2006 for foreign S&E graduate students are still somewhat below the peaks seen earlier in the decade.

The report, written by NSF's Science Resources Statistics division, provides indicators about the future S&E workforce. The number of students studying science and engineering gives an indication of the number of people who may work in these fields after graduation.

The percentage of foreign students among all S&E graduate students remained at the 2005 level of 29 percent but was down from 31 percent in 2003.

The increase in enrollment for first-time, full-time S&E graduate students who were U.S. citizens and permanent residents was much smaller than that of foreign students, rising slightly more than 1 percent in 2006.

Foreign graduate students enrolled in S&E fields increased by 45 percent between 1996 and 2006, while enrollment for U.S. citizens and permanent residents increased by 8 percent during the same period. Enrollment of U.S. citizens and permanent residents reached a new peak of 343,603 students, but the gains in numbers in 2006 were much smaller than in 2002 and 2003.

The 2006 Survey of Graduate Students and Postdoctorates in Science and Engineering from which the data were taken is the only national survey of graduate S&E enrollment in all eligible colleges and universities.