Increase is vital to advancing science and maintaining global leadership 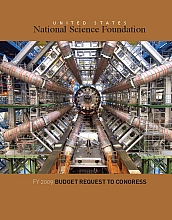 The ATLAS Barrel Toroid Magnet, so enormous that a human is dwarfed at its center.

Bement said the increase reflected a growing consensus that the United States needs to invest more resources in basic scientific research if it is to remain a global leader in science and technology. "More than a dozen major studies have now concluded that a substantial increase in federal funding for basic scientific research is critical to ensure the preeminence of America's scientific and technological enterprise," Bement said.

"Increased federal investments in research and education are imperative now to sustain our comparative advantages in a flattening world," Bement added. "The NSF budget for 2009 reflects that commitment."

The new budget emphasizes investment in new knowledge and talent development while also maintaining support to existing research efforts that are vital to advancing the frontiers of discovery and ensuring that America remains a global leader in science and technology.

The FY 2009 request includes four major cross-foundation investments that aim to have a transformative impact across science and engineering, especially in such areas of national priority as manufacturing, computing, energy, cybersecurity, sensors and materials.

Strong, sustained support for individual investigator and small group activities remains a priority for investments across the foundation. With the 16 percent growth in research and related activities, NSF anticipates supporting an additional 1,370 research grants. This will help to increase the funding rate to 23 percent from 21 percent, especially for unsolicited grants that potentially advance the frontiers of learning and discovery.

The America COMPETES Act of 2007 underscores the need to strengthen the nation's science and engineering workforce, placing special emphasis on improving opportunities for scientists and engineers at the beginning of their careers. In keeping with this, the Faculty Early Career Development (CAREER) Program--NSF's flagship program for young faculty--increases by over $14 million to $181.9 million. Other activities that traditionally involve young faculty--the Research Experiences for Undergraduates Program (REU) and Research in Undergraduate Institutions Program (RUI)--also increase.

GRF is widely recognized as a unique fellowship grant program because it supports the broad array of science and engineering disciplines across all fields, as well as international research activities. Funding for GRF in FY 2009 increases by $28.6 million (nearly 30 percent) to $124.8 million. This will support an estimated 3,075 fellows, an increase of 700 over the FY 2008 level. The GRF program recognizes the growing significance of the changing global environment for future scientists and engineers, and is bringing more international emphasis and increased opportunities for students to expand their knowledge of research and education in other nations, and in international issues affecting science, technology, engineering and mathematics careers.

The FY 2009 budget request includes $15 million for a competition to add five to seven new Science and Technology Centers. The STC Program advances discovery and innovation in science and engineering through the integration of cutting-edge research, excellence in education, targeted knowledge transfer, and development of a diverse workforce. Partnerships established by the STC Program go beyond NSF and academia to the active participation of industry and national laboratories in research projects; the transfer of technology to appropriate industries; the application of patents derived from the work of the STCs; and the launching of spin-off companies.

The FY 2009 request includes $116.9 million for cybersecurity research and education, with $30.0 million specifically devoted respectively to research in usability ($10 million), theoretical foundations ($10 million), and privacy ($10 million) to support the Comprehensive National Cybersecurity Initiative. These investments in cybersecurity and information security and privacy will produce research results that allow society to more fully exploit the potential benefits of an increasingly networked world. In addition, the Scholarship for Service program, which funds scholarships to build a cadre of federal professionals with skills required to protect the nation's critical information infrastructure, increases by 30 percent to $15 million.

The FY 2009 budget request provides continued strong support for a range of activities to ensure a clean, healthy and stable ocean environment. Included is $17 million for activities to support the interagency Ocean Research Priorities Plan. Investments in facilities for oceans research also increase significantly, with an increase of $21.8 million for the Integrated Ocean Drilling Program and the Academic Research Fleet.

NSF's investments in the facilities and infrastructure needed to support polar research increase by $30.1 million. This includes increases for energy efficiency and fuel conservation and major investments needed to ensure resupply capabilities for research facilities in the Antarctic. Also of note, NSF funding for U.S. Coast Guard polar icebreakers decreases by $3 million, as beginning in FY 2009, NSF will no longer provide funds for maintaining the Coast Guard's Polar Star in caretaker status.

Enriching the Education of STEM Teachers

In FY 2009, a major focus of activities in NSF's Education and Human Resources (EHR) Directorate is enriching the education of science, technology, engineering and mathematics teachers. Major activities associated with this focus include the Math and Science Partnership program (up $2.5 million to $51 million) and the Robert Noyce Scholarship Program (up $800,000 to $11.6 million).

Promoting Learning through Research and Evaluation

The EHR Directorate is also increasing support for research and evaluation efforts in science, technology, engineering and mathematics education. Major efforts in FY 2009 include a $3 million increase to $10 million for Project and Program Evaluation, and an $8.5 million increase to $108.5 million for Discovery Research K-12, which supports applied research and innovation aimed at improving STEM education at the K-12 level.

NSF remains a leader in efforts to broaden participation in science and engineering. This includes efforts to reach all states and regions, notably the Experimental Program to Stimulate Competitive Research, which increases to $113.5 million in FY 2009. Efforts that focus on underrepresented groups also increase. Examples include Alliances for Graduate Education and Professoriate (AGEP), the Historically Black Colleges and Universities-Undergraduate Program (HBCU-UP), the Louis Stokes Alliances for Minority Participation (LSAMP), and Centers of Research Excellence in Science and Technology (CREST).

NSF plays a significant role in several interagency R&D priorities, including the Networking and Information Technology R&D (NITRD) program, the National Nanotechnology Initiative (NNI), the U.S. Climate Change Science Program (CCSP), the Climate Change Technology Program (CCTP), and initiatives related to homeland security. The Foundation will continue as a major participant in each of these areas in FY 2009, with increases for NNI, NITRD and CCSP.

The investments that support NSF's stewardship goal--to support excellence in science and engineering research and education through a capable and responsive organization--remain a priority in FY 2009, increasing by 13 percent to $404.3 million. The request increases the NSF workforce by 50 staff to manage the growing and increasingly complex workload being experienced throughout the Foundation. Investments in information technology (IT) increase by 32 percent to $82 million, with emphasis on efforts to increase efficiency, productivity and transparency in NSF's business processes. In this request, NSF's IT portfolio is realigned to tie funding for mission-related activities more directly to NSF's programs.