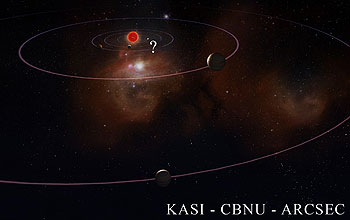 Scientists have discovered a solar system with scaled-down versions of Saturn and Jupiter.

A team of international astronomers reports in the Feb. 15 issue of Science the discovery of a solar system nearly 5,000 light years away containing scaled-down versions of Jupiter and Saturn. Their findings suggest that our galaxy could conceivably contain many star systems similar to our own. The National Science Foundation (NSF) sponsored the research.

"NSF is delighted to have played a role in enabling such an exciting discovery," said Michael Briley, a program manager in NSF's Division of Astronomical Sciences. "One of the outstanding questions has been whether or not planetary systems like ours are common, and it appears they may well be."

The new solar system appears to be a smaller analog of our own. One of its planets has 70 percent of Jupiter's mass and another has 90 percent of Saturn's mass. The sun they orbit has about 50 percent the mass of the sun. Although the star is much dimmer than our sun, temperatures at both planets are likely to be similar to that of Jupiter and Saturn because they are closer to their star.

"The fascinating part is that if we 'scale' everything to the mass and brightness of the parent star, the masses of these planets relative to their star, and the amount of sunlight they receive, [the planets] are close to our own Jupiter and Saturn," said lead author Scott Gaudi, assistant professor of astronomy at Ohio State University. "So what we've found is a solar system analog, or a 'scaled solar system.'"

The two planets were revealed when the star they orbit crossed in front of a more distant star being observed from Earth. For a two-week period from late March through early April of 2006, the nearer star magnified the light shining from the farther star. The phenomenon is called gravitational microlensing -- in this case, the light from the more distant star was magnified 500 times.

The gravitational microlensing technique is based on a concept first discussed by Albert Einstein in the early 20th century. When astronomers observe a star, the light waves generally travel straight from the star to the telescope; however, if another star passes in between, even if great distances separate the two, the gravity of the nearer object acts like a lens and magnifies the incoming light. Telescopes cannot resolve the details of the magnified image, but they do notice a peak in light intensity--and when a planet is present around the closer star, the planet's gravity adds a small peak of its own. Astronomers can use this occurrence to determine how large the planet is and how far away it is from its star.

"This is the first case in which a Jupiter-mass planet was detected [where] we had significant sensitivity to additional planets," Gaudi said. "You could call it luck, but I think it might just mean that these systems are common throughout our galaxy."