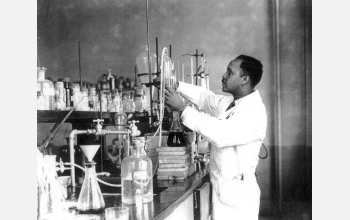 The young Percy Julian in a laboratory.

"Forgotten Genius," a two-hour documentary about the life of chemist Percy Julian, funded in part by the National Science Foundation (NSF) has received a prestigious award from the American Association for the Advancement of Science (AAAS). The AAAS Science Journalism Award (SJA) recognizes outstanding reporting for a general audience and honors individuals for their coverage of the sciences, engineering and mathematics. Among this year's winners are the producers of "Forgotten Genius," part of the NOVA series produced by WGBH-TV and broadcast nationally on PBS.

The grandson of Alabama slaves, Julian received a doctorate in chemistry in 1931 and went on to successfully synthesize an alkaloid called physostigmine, which was used to treat glaucoma -- a disease responsible at the time for 15 percent of all cases of blindness in the United States. Hired by Glidden, a manufacturer of paints and other products, he became the first black chemist to direct a chemical research laboratory. In that role he filed more than 100 patents, working with the soybean plant to develop dozens of products, from water-based paints to paper coating to protein-rich foods.

Among Julian's most significant scientific accomplishments is his work with steroids. Using stigmasterol, a plant steroid produced by soybeans, Julian was able to produce the pregnancy hormone progesterone affordably and in bulk, an achievement that helped launch the steroid industry, whose products would eventually include cortisone and the birth control pill.

By 1953, Julian had decided to leave Glidden and form Julian Laboratories, where he continued in his scientific work while establishing his lab as a haven for other black chemists, hiring more of them than any other company in America. He later sold his business for $2.3 million, becoming one of the wealthiest black entrepreneurs in the nation.

He continued to work on behalf of both science and civil rights, surviving death threats and an arsonist's attempt to burn down his house. Meanwhile, he mentored young African-American scientists and worked with the NAACP Legal Defense and Education Fund to bring about change in the lot of the black man in America. By 1973, he had reached a new milestone - being elected to the National Academy of Sciences - only the second African-American to become a member.

One of the challenges in developing this project was that no biography existed of Julian's life. Producer Stephen Lyons and Director Llewellyn Smith - both winners of the SJA -- were initially daunted by the fact that little written information about Julian existed, beyond a couple of articles and some scattered press clippings.

"This was hardly enough to base a two-hour program on," says Lyons. "And it meant that before we could even think about making a film, we'd have to do the kind of original research that normally goes into writing a book."

Although Julian had died in 1975, many of the people who worked with and for him were still living. So began a comprehensive effort to document the life and accomplishments of this man.

The program Web site at http://www.pbs.org/wgbh/nova/julian/ has information on Julian's scientific and career milestones as well as audio excerpts from a speech he gave in 1965, and audio interviews with people who knew him and worked with him. Visitors to the site can also follow the chemical steps involved in building a steroid and see examples of the life-saving drugs developed from ingredients in nature.

"Forgotten Genius" is one of a series of programs on the lives of scientists funded by NSF.

"'Forgotten Genius' not only gives the public a greater understanding of the scientific concepts behind Julian's significant discoveries," says NSF program director Valentine Kass. "It also tells the compelling story of a man of great intellect, personal courage and tenacity. We are proud of its contributions to the Lives in Science series."

Since their inception in 1945, the AAAS Science Journalism Awards have honored more than 300 individuals for their achievements. The winning journalists have helped to foster the public's understanding and appreciation of science.