Diseases that originate in animals are a primary concern 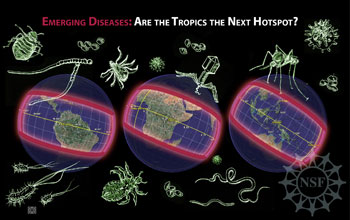 For the first time, scientists are able to predict where the next pandemic might occur.

Scientists from four well-known institutions say the next major disease like HIV/AIDS or SARS could occur in any of a number of developing countries concentrated along the equator.  They encourage increased surveillance to prevent the spread of a potential outbreak.

Using global databases and sophisticated computer models to analyze patterns of emerging diseases, the researchers -- from the Consortium for Conservation Medicine (CCM) at Wildlife Trust, N.Y., the Institute of Zoology, London, U.K., Columbia University, N.Y., and the University of Georgia, Athens, Ga. -- are able for the first time to plot, map and predict where the next pandemic might occur.

Funded through a Human and Social Dynamics Exploratory Research award from the National Science Foundation (NSF), Arlington, Va., the research represents a major breakthrough in understanding where and why pandemic diseases emerge and provides a key tool for preventing them in the future.

"This is an important area of research," said Rita Teutonico, advisor for integrative activities in NSF's Directorate for Social, Behavioral and Economic Sciences. "After years of debate, the scientific community is now able to offer a convincing, predictive tool to help policy professionals and resource managers better allocate global resources in the fight against emerging diseases."

They cite zoonoses -- diseases that originate in animals -- as the primary problem and conclude these are the most current and important threat to humans.  The research shows "that the key threat to public health is where human population growth and wildlife diversity clash," said Peter Daszak, executive director of the Consortium for Conservation Medicine at Wildlife Trust.

The scientists analyzed 335 incidents of previous disease emergence and were able to identify the regions where future diseases were most likely to occur.  They plotted the results on a global, "Emerging Disease Hotspots" map.

"Our hotspots map shows that the next new important zoonotic disease is likely to originate in the Tropics, a region rich in wildlife species and under increasing pressure from people," Daszak said.

This is the first time researchers are able to provide a scientific prediction of where the next major disease like HIV or SARS could emerge. During the last three decades, researchers have spent billions of research dollars to deal with the seemingly random emergence of dozens of pandemics. None of their efforts to understand patterns of emergence were successful.

This new research, published in the February 21 edition of the leading scientific journal Nature, successfully examined over 50 years of disease emergence patterns using a specially designed computer database to pinpoint regions of the world that need more monitoring.

"This is a seminal moment in how we study emerging diseases," said Professor John Gittleman, dean in the University of Georgia's Odum School of Ecology, who developed the team's approach to analyzing global databases."Our study has shown that bringing ecological sciences and public health together can advance the field in a dramatic way."

But in light of this new information, the researchers note that additional resources need to be properly directed to safeguard public health.

"Most of our resources are focused on the richer countries in the North that can afford surveillance," said Daszak.  "This is basically a misallocation of global health funding, and our priority should be to set up 'smart surveillance' measures in the hotspots, most of which are in developing countries."

"If we continue to ignore this important preventative measure, then human populations will continue to be at risk from pandemic diseases," he said.