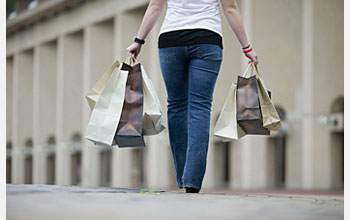 A person's mood may impact how much money he or she spends for routine economic transactions.

Off to buy a new handbag and fabulous red shoes, or how about overalls and a riding lawnmower? Before going, a mood check for signs of despair and gloom might be in order because how a person feels can impact routine economic transactions, whether he or she is aware of it or not.

So says a team of behavioral scientists from four major U.S. universities, whose research study finds that sadness impacts spending. Specifically, people who feel sad and self-focused pay more money for goods than those in neutral states, even when purchasing the same item.

"The tendency is to focus on oneself when sad drives this effect," says the study's lead author Cynthia E. Cryder, a doctoral student at Carnegie Mellon University, Pittsburgh, Pa. "Our studies revealed the more self-focused people were in the sad condition, the more money they spent."

"More research is needed to determine whether participants are deliberately trying to improve their sense of self by acquiring goods," adds study co-author Jennifer Lerner, an experimental social psychologist at Harvard University's Kennedy School of Government in Cambridge, Mass.

The study, "Misery is not Miserly: Sad and Self-Focused Individuals Spend More," was funded by the National Science Foundation and was presented at the Society for Personality and Social Psychology annual meeting in Albuquerque, N.M. in February of this year. It will be published in the June 2008 issue of Psychological Science--a premier journal for scientific experiments in psychology.

In one experiment, primarily conducted by researchers at Carnegie Mellon and Harvard University, test subjects viewed either a sad video clip or one devoid of human emotion. The video clips included either a sad scene from the 1979 movie "The Champ" or neutral scenes from a National Geographic documentary on coral reefs.

Afterward, participants could purchase an ordinary commodity, such as a water bottle, at various prices. Participants, randomly assigned to view the sad video clip, offered almost 300 percent more than the "neutral" participants to buy the same product.

Interestingly, in a prior, similar study led by Lerner, participants who viewed the sad video clip typically and incorrectly insisted the emotional content of the film clip did not affect their spending. The finding showed that people can lack awareness of how feelings impact their own economic decisions.

Research team members speculate that self-focus coupled with sadness causes people to devalue both themselves and their current possessions. The result, they believe, is increased willingness to pay more for new material goods, presumably to enhance the sense of self.

"Self-focus helps explain the spending differences between the 'sad' and 'neutral' groups," says Lerner. "Sadness tends to increase self-focus, making the increased spending prompted by the combination of sadness and self-focus difficult to avoid."

The "misery is not miserly" effect may be even more dramatic in real life, as the low-intensity sadness evoked in the experiment likely underestimates the power of intense sadness on spending behavior.

Moreover, say researchers, the effect could extend to domains beyond purchasing decisions. It may cause people to engage in increased stock trading or to seek new relationships without conscious awareness that they are being driven by their emotions.

According to Lerner, the research could also be "scaled-up" to factor in events for groups or communities and not just individuals.

"If a sad event happens in a community, for example a school bus accident," she says, "people in that community might be willing to sell their homes for less money than the actual value and buy homes for more than the new home's value."

She says the study's results lend weight to the contention that policymakers may want to build emotional factors into disaster recovery models.

"It is important to increase understanding of how emotion and economic decisions interact," says Cryder. "The relatively new field of behavioral decision research is increasingly moving in that direction."