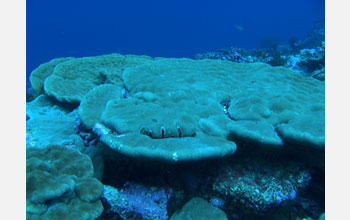 Coral ecosystems were among those profiled by researchers.

Nowhere is the principle of "strength in numbers" more apparent than in the collective power of microbes: despite their simplicity, these one-cell organisms--which number about 5 million trillion trillion strong (no, that is not a typo) on Earth--affect virtually every ecological process, from the decay of organic material to the production of oxygen.

But even though microbes essentially rule the Earth, scientists have never before been able to conduct comprehensive studies of microbes and their interactions with one another in their natural habitats. Now, a new study--funded by the National Science Foundation (NSF) and described in the March 12, 2008 online issue of Nature--provides the first inventories of microbial capabilities in nine very different types of ecosystems, ranging from coral reefs to deep mines.

"These new microbial inventories provide a new and important window into ecosystems and how they respond to stresses, such as pesticide runoff and invasive species," said Lita Proctor, an NSF program director.

Rather than identifying the kinds of microbes that live in each ecosystem, the study catalogued each ecosystem's microbial "know-how," captured in its DNA, for conducting metabolic processes, such as respiration, photosynthesis and cell division. These microbial catalogues are more distinctive than the identities of resident microbes. "Now microbes can be studied by what they can do not who they are," said Proctor.

This microbial study employed the principles of metagenomics, a powerful new method of analysis that characterizes the DNA content of entire communities of organisms rather than individual species. One of the main advantages of metagenomics is that it enables scientists to study microbes--most of which cannot be grown in the laboratory--in their natural habitats.