Tell Them Where It Hurts 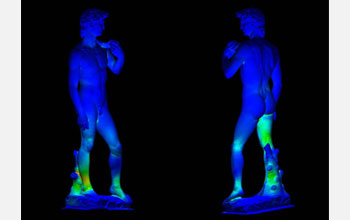 A front and back view of Michelangelo's David through the eyes of the Scan and Solve software.

For statues, stress injuries come from standing in place for hundreds of years. Using a novel technique, researchers have now developed a way to predict such fracturing, applying the procedure to Michelangelo's David in an analysis that proved simpler, faster and more accurate than previous methods.

In applying the technique to other objects -- including human bones -- the researchers are also gaining new perspective on how these structures are likely to fail.

On March 18, 2008, Vadim Shapiro of the University of Wisconsin-Madison, Igor Tsukanov of Florida International University and their colleagues will present their latest results from their Scan and Solve technique at the International Conference on Computational and Experimental Engineering and Sciences in Honolulu, Hawaii.

"This research is likely to result in a breakthrough technology for performing direct engineering analysis on physical artifacts in situ (in place)," said Shapiro, director of the Spatial Automation Laboratory at his university.

Scan and Solve takes 3-D sampled or scanned data of an object and calculates where points of weakness occur and how those points will be affected by forces acting on them, such as gravity in the case of David or activity in the case of a human bone.

"These calculations are simple and painless, allowing for the exploration of many potential solutions for fixes in areas where fractures might occur," said Shapiro.

3-D data sets are now commonplace, whether from medical analyses conducted in doctors' offices across the country or laser scans used to capture complex shapes like the Hatcher Triceratops skeleton at the Smithsonian National Museum of Natural History.

Engineers can capture datasets for almost anything, even enormous structures, because the techniques can often be used to scan an object in place without the need to transport the object to a laboratory.

The breakthroughs developed by the researchers and their collaborators over the last decade builds upon the realization that the data provides, for any object, a detailed field map that can be represented as a weighted sum of various distances from a given point.

"Unlike existing analysis techniques that can be error prone and require models that take far longer to create, Scan and Solve compresses the entire analysis into a series of automated, efficient steps," says Michael Freytag, whose doctoral thesis details the Scan and Solve approach.

In their analysis of Michelangelo's David, the researchers were able to predict the stresses that the statue endures on a daily basis by using the Scan and Solve software with original shape data.

The analysis matched well with the statue's known crack damage, indicating that the method could help archivists by serving as a predictor for what areas of an ancient artifact may need to be bolstered to prevent damage, even if the statue has not yet shown fatigue.

The same approach could work for a bone or car part or any other heavily used component, potentially aiding engineers as they develop protections for those objects.

However, the research breakthrough is not only the predictive capabilities, said NSF Program Director Judy Vance who supported the research effort.

"For engineers designing new structures and components, the Scan and Solve claim to fame is the ability to go directly from scan data to analysis model without any intermediate steps that produce accumulating errors," said Vance. "This approach produces improved results that can be computed in less time providing a smooth link between the gathering of data and the analysis of data."

Now that digitized data are becoming commonplace, the researchers see Scan and Solve as a new way to bring the power of software-driven engineering tools such as computer-aided design to art, architecture, medicine and other systems that have not benefited from engineering analysis in the past.