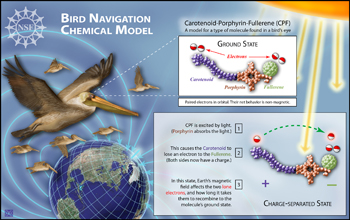 The charge-separated state of the photochemical molecule CPF is sensitive to weak magnetic fields.

A team of researchers at Arizona State University and the University of Oxford are the first to model a photochemical compass that may simulate how migrating birds use light and Earth's weak magnetic field to navigate. The team reports in the April 30, 2008, online issue of Nature that the photochemical model becomes sensitive to the magnitude and direction of weak magnetic fields similar to Earth's when exposed to light. The research funded by the National Science Foundation (NSF) demonstrates that this phenomenon, known as chemical magnetoreception, is feasible and gives insight into the structural and dynamic design features of a photochemical compass.

The most common bird migration pattern in the northern hemisphere is to fly north in the summer to breed in the Artic and to fly south to warmer regions for the winter.

Regardless of which way they are flying, migrating birds are important ecologically as a food source for other animals. They also transport plankton, materials involved in plant reproduction and hitchhikers such as ticks and lice, which can carry micro-organisms harmful to human health.

About 50 animal species, ranging from birds and mammals to reptiles and insects, use Earth's weak magnetic field for navigation. Earth's magnetic field ranges from approximately 30 to 60 millionths of one tesla. By comparison, magnetic resonance imaging, or MRI, uses magnetic fields from 1.5 to 3.0 tesla.

Even though the mechanisms of a bird's internal compass have been studied intensively, they are not completely understood.

One existing theory is that photoreceptors in a bird's retina absorb light, which causes a chemical reaction that, in turn, produces a short-lived photochemical species whose lifetime is sensitive to the magnitude and direction of a weak magnetic field.

The photoreceptor theory is supported by the fact that blue light photoreceptors have been detected in retinas of migratory birds when they perform magnetic orientation. However, it has not been confirmed in the field or the lab that a magnetic field as weak as Earth's can produce detectable changes within a photochemical molecule; nor, has a photochemical molecule been shown to respond to the direction of such a magnetic field until now.

The U.S. and U.K. researchers have demonstrated that a synthesized photochemical molecule composed of linked carotenoid, porphyrin and fullerene units can act as a magnetic compass. Carotenoid is an organic pigment that occurs naturally in plants and other photosynthetic organisms. Porphyrin is similar to a chlorophyll molecule and exists in green leaves and red blood cells. Fullerene is composed entirely of carbon, and a spherical fullerene is known as a "buckyball."

Under normal conditions, each of the outer electron orbitals of the linked carotenoid (C), porphyrin (P) and fullerene (F) units contain two paired electrons. In the pair, the magnetic "north" pole of one electron is matched with the magnetic "south" pole of the other, causing it to be non-magnetic. As all of its electrons are paired, the CPF molecule has a neutral charge and exists in its lowest energy or ground state. Alternatively, when a CPF molecule is exposed to light, porphyrin absorbs the light energy and moves into a higher energy or excited state.

Given that the single, or radical, electrons located in the outer orbitals of the carotenoid and fullerene units are no longer paired with their partner electrons, and are located on opposite ends of the C•+PF•- molecule, they can respond to the direction and magnitude of weak external magnetic forces of approximately 50 millionths of a tesla. After a brief moment, the lone radical electron on the fullerene returns to the carotenoid and the absorbed light energy is converted to heat.

"These results provide a clear proof-of-principle that the magnetic compass sense of migratory birds is based on a magnetically sensitive chemical reaction whose lifetime depends on the orientation of its molecules to Earth's magnetic field," said Peter Hore, professor of chemistry at Oxford University and head of the U.K. team.

Gust and Arizona State University collaborators Thomas Moore and Ana Moore originally synthesized photochemical molecules related to the CPF molecule for use in artificial photosynthetic reaction centers. These centers mimic the mechanisms by which photosynthetic organisms convert sunlight into useful forms of energy. They are now looking at developing their molecules for solar production of electricity or fuels such as hydrogen.

"The research completed by Gust and his collaborators is an excellent example of how basic research can lead to new knowledge and applications in many different fields of science and technology," said Tyrone Mitchell, director of NSF's Organic and Macromolecular Chemistry Program.

The research was supported by NSF Division of Chemistry award number 0352599.