Lake Baikal in Siberia had been thought resistant to climate change 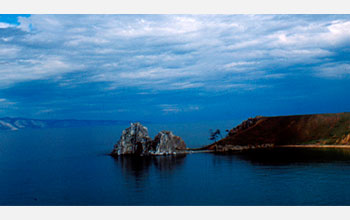 Russian and American scientists have discovered that the rising temperature of the world's largest lake, located in frigid Siberia, shows that this region is responding strongly to global warming.

Drawing on 60 years of long-term studies of Russia's Lake Baikal, Stephanie Hampton, an ecologist and deputy director of the National Center for Ecological Analysis and Synthesis (NCEAS) in Santa Barbara, Calif., and Marianne Moore, a biologist at Wellesley College in Wellesley, Mass., along with four other scientists, report their results on-line today in the journal Global Change Biology.

"Warming of this isolated but enormous lake is a clear signal that climate change has affected even the most remote corners of our planet," Hampton said.

In their paper, the scientists detail the effects of climate change on Lake Baikal--from warming of its vast waters to reorganization of its microscopic food web.

"The conclusions shown here for this enormous body of freshwater result from careful and repeated sampling over six decades," said Henry Gholz, program director for NCEAS at the National Science Foundation (NSF), which funded the research. "Thanks to the dedication of local scientists, who were also keen observers, coupled with modern synthetic approaches, we can now visualize and appreciate the far-reaching changes occurring in this lake."

Lake Baikal is the grand dame of lakes. In 1996, the United Nations Educational, Scientific and Cultural Organization (UNESCO) declared it a World Heritage site because of its biological diversity. It boasts 2500 plant and animal species, with most, including the freshwater seal, found nowhere else in the world.

The lake contains 20 percent of the world's freshwater, and it is large enough to hold all the water in the United States' Great Lakes. It is the world's deepest lake as well as its oldest; at 25 million years old, it predates the emergence of humans.

In more recent times, it was a dedicated group of humans who made this study possible.

"Our research relies on a 60-year data set, collected in Lake Baikal by three generations of a single family of Siberian scientists," Moore said. "In the 1940s, Mikhail Kozhov began collecting and analyzing water samples in anticipation that this lake could reveal much about how lakes in general function.

"Ultimately, his daughter Olga Kozhova continued the program, followed by her daughter, who is also a co-author of today's paper: Lyubov Izmest'eva."

The decades-long research effort survived the reign of Stalin, the fall of the Soviet Union, and other social and financial upheavals in the region.

Data collection continued through every season, in an environment where winter temperatures drop to -50 degrees F.

The data on Lake Baikal reveal "significant warming of surface waters and long-term changes in the food web of the world's largest, most ancient lake," write the researchers in their paper.  "Increases in water temperature (1.21°C since 1946), chlorophyll a (300 percent since 1979), and an influential group of zooplankton grazers (335 percent since 1946) have important implications for nutrient cycling and food web dynamics."

The scientists conclude that the lake now joins other large lakes, including Superior, Tanganyika and Tahoe, in showing warming trends.

"But," they note, "temperature changes in Lake Baikal are particularly significant as a signal of long-term regional warming.

"This lake was expected to be among those most resistant to climate change, due to its tremendous volume and unique water circulation."

The research paper is the result of a collaboration involving six Siberian and American scientists, who were assisted by student translators from Wellesley College.