Ancient Beachcombers May Have Travelled Slowly 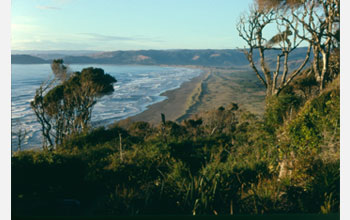 New evidence, more questions. That's the thumbnail of the first new data reported in 10 years from Monte Verde, the earliest known human settlement in the Americas.

Evidence from the archaeological site in southern Chile confirms Monte Verde is the Americas earliest known settlement and is consistent with the idea that early human migration occurred along the Pacific Coast more than 14,000 years ago, but questions remain about just how rapidly that migration occurred.

"If all the early American groups were following a similar pattern of moving back and forth between inland and coastal areas, then the peopling of the Americas may not have been the blitzkrieg movement to the south that people have presumed, but a much slower and more deliberate process," says Tom Dillehay, professor of anthropology at Vanderbilt University, Nashville, Tenn., who led the study.

The journal Science publishes a report on the findings by Dillehay and team of international scientists in its May 9 issue.

"Monte Verde is an iconic site in New World archaeology and Americanist archaeologists recognize its importance," says John Yellen, program manager at the National Science Foundation, which funded the research. "They also agree that Tom Dillehay has conducted an outstanding program of research there."

Most scholars now accept that people entered North America through the Bering Strait land bridge before 16,000 calendar years ago. It is not known whether people colonized the Americas by moving along the Pacific coast, through interior routes or both.

Researchers envision that coastal migration would have been a rapid process, but seaweed samples and gomphothere meat (meat from an extinct elephant-like animal that was widespread in the Americas 12-1.6 million years ago) found at Monte Verde may be signs of slower migration.

Although the site is located 50 miles from the Pacific coast and 10 miles from an inland marine bay to the south, Dillehay and the research team identified nine species of seaweed and marine algae found in hearths and other areas in the settlement. The samples were directly dated between 14,220 to 13,980 years ago, 1,000 years earlier than other reliably dated human settlements in the Americas and indicate that early immigrants could have moved south along the shoreline exploiting familiar coastal resources to get much of their food.

The researchers also found a number of inland resources, including gomphothere meat. The finding suggests immigrants moved back and forth between the coast and inland areas.

"It takes time to adapt to these inland resources and then come back out to the coast. The other coastal sites that we have found also show inland contacts," says Dillehay.

A wide variety of food was found at the site, including an extinct species of llama, shellfish, vegetables and nuts. The findings make it more difficult to determine the rate of coastal migration in the Americas and the specific path of the immigrants.

"We have no hard evidence that people migrated either rapidly or slowly along the coast," says Dillehay. "Most scholars believe that the first people came via the land bridge but the question is open."

Evidence to support the coastal migration theory is particularly hard to find because sea levels at the time were about 200 feet lower than today. As the sea level rose, it covered most of the early coastal settlements. But the seaweed finding, one of the most significant, verifies the migrants' use of coastal resources, making it a likely path.

"Finding seaweed wasn't a surprise, but finding five new species in the abundance that we found them was a surprise," said Dillehay. "The Monte Verdeans were really like beachcombers. The number and frequency of these items suggests very frequent contact with the coast, as if they had a tradition of exploiting coastal resources."