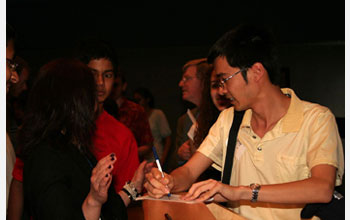 UCLA Professor of Mathematics Terence Tao was presented with the Alan T. Waterman Award. The annual Waterman Award recognizes an outstanding young researcher in any field of science or engineering supported by the NSF and carries a $500,000 grant for a three-year period. Often called a "supreme problem solver," and the "Mozart of Math," Tao and his work have had a tremendous impact across several mathematical areas. Tao spent a day at NSF, during which he conducted a seminar on his mathematical concepts and participated in an interview with NSF's Assistant Director for Math and the Physical Sciences Tony Chan, during which they describe Tao's research, his style of research and plans for future exploration, and larger questions with significance to understanding the scientific enterprise today. Excerpts from this interview are attached.

Esteemed businessman and aerospace engineer Norman Augustine was awarded the prestigious Vannevar Bush Medal, an award the NSB presents to an individual whom, through public service activities in science and technology, has made an outstanding "contribution toward the welfare of mankind and the nation." As Augustine was unable to accept the award in person, he pre-recorded a message last week during a conference that assessed progress on recommendations in "Rising Above the Gathering Storm," a report published two years ago by nonprofit, business and government experts in science and engineering, also known as, "Augustine Commission." In his message, Augustine addressed the NSB in its open plenary.

The NSB also presented two public service awards to organizations: SAE International, for which 2008 SAE President Thomas Ryan accepted the award and addressed the NSB; and the Bayer Corporation, for which Bayer President and CEO Attila Molnar accepted the award, and Mae Jemison, Bayer's national spokesperson for its award-winning program Making Science Make Sense, addressed the NSB's open plenary session. Jemison, the first African-American woman to travel in space, participated in an on-camera interview with Kathie Olsen, NSF's deputy director (excerpts from which will soon be posted on the NSF website).