Parallel to catastrophic event of 635 million years ago 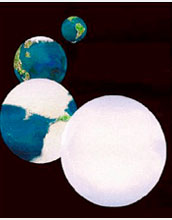 The ending millions of years ago of the "Snowball Earth" may have clues to climate today.

An abrupt release of methane, a powerful greenhouse gas, from ice sheets that extended to Earth's low latitudes some 635 million years ago caused a dramatic shift in climate, scientists funded by the National Science Foundation (NSF) report in this week's issue of the journal Nature.

The shift triggered events that resulted in global warming and an ending of the last "snowball" ice age.

The researchers believe that the methane was released gradually at first and then very quickly from clathrates--methane ice that forms and stabilizes beneath ice sheets.

When the ice sheets became unstable, they collapsed, releasing pressure on the clathrates. The clathrates then began to de-gas.

"Our findings document an abrupt and catastrophic global warming that led from a very cold, seemingly stable climate state to a very warm, also stable, climate state--with no pause in between," said geologist Martin Kennedy of the University of California at Riverside (UCR), who led the research team.

"What we now need to know is the sensitivity of the trigger," he said. "How much forcing does it take to move from one stable state to the other--and are we approaching something like that today with current carbon dioxide warming?"

This transition "from 'snowball Earth' into a warmer period shows the compelling need for research on abrupt climate change in Earth's history," said H. Richard Lane, program director in NSF's Division of Earth Sciences. "These changes have much to tell us about the modern human-induced threat of rapid climate change."

According to Kennedy and colleagues, methane clathrate destabilization acted as a runaway feedback to increased global warming, and was the tipping point that ended the last snowball Earth. (The snowball Earth hypothesis posits that the Earth was covered from pole to pole in a thick sheet of ice for millions of years at a time.)

"Once methane was released at low latitudes from destabilization in front of the ice sheets, warming caused other clathrates to destabilize," Kennedy said. "Clathrates are held in a temperature-pressure balance of only a few degrees."

Not all of Earth's methane was released millions of years ago. Methane clathrates are present today in Arctic permafrost and beneath the oceans at continental margins; they will remain dormant, it's thought, unless triggered by warming.

This trigger is a major concern, Kennedy said, because it's possible that very little warming could unleash this trapped methane.

Uncovering the methane reservoir could potentially warm the Earth tens of degrees, he said, and the mechanism could be very rapid.

Such a fast uncovering of clathrates could have triggered a catastrophic climate and biogeochemical reorganization of the ocean and atmosphere around 635 million years ago, Kennedy believes.

The abruptness of the glacial termination, along with changes in ancient ocean chemistry and chemical deposits in the oceans, have been a challenge to climate scientists.

"The geologic deposits of this period are quite different from what we find in subsequent deglaciation," Kennedy said. "They immediately precede the first appearance of animals on Earth, suggesting some kind of environmental link."

Also called marsh gas, methane is a colorless, odorless gas. As a greenhouse gas, it is about 30 times more potent than carbon dioxide.

"Today we're conducting a global-scale experiment with Earth's climate system," Kennedy said, "and witnessing an unprecedented rate of warming, all with little or no knowledge of what instabilities lurk in the climate system and how they can influence life on Earth.

"Much the same experiment was done 635 million years ago, and the outcome is preserved in the geologic record. We see that strong forcing on the climate, not unlike the current carbon dioxide forcing, results in the activation of latent controls in the climate system that, once initiated, change climate to a completely different state."

The scientists found the broadest range of oxygen isotopic variation ever reported from marine sediments, which they attribute to melting waters in ice sheets as well as destabilization of clathrates by glacial meltwater.

Kennedy was joined in the study by David Mrofka of UCR and Chris von der Borch of Flinders University, Australia.

The study also was supported by grants from NASA's Exobiology Program.