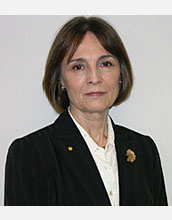 Marta Cehelsky has been named vice president and secretary of the Universities Research Association (URA) after more than 25 years of distinguished service to the National Science Foundation (NSF). Cehelsky now serves NSF as senior adviser in the Office of the Director, as well as executive secretary of the National Science and Technology Council's Committee on Science under the White House Office of Science and Technology Policy.

She previously served four years as senior adviser for science and technology at the InterAmerican Development Bank, the largest provider of multilateral development assistance to Latin America and the Caribbean.

"Valuable contributions and important achievement in a number of areas inside and outside NSF characterize Dr. Cehelsky's impressive tenure at NSF," said NSF Director Arden L. Bement, Jr. "We appreciate her leadership and wish her the best at URA and in all of her new pursuits."

For a decade (1992 to 2002), Cehelsky served as executive officer of the National Science Board, which is responsible for NSF policy and for advising the President and Congress on national science and technology policy. She held a number of other senior policy positions at NSF, including senior international fellow and principal NSF liaison to the policy committees of the National Academies. She also served one year on the staff of Senator Ernest Hollings (D-SC) as special assistant for policy. As a senior policy analyst at NASA she was a member of the Presidential Task Force on Remote Sensing Policy. Cehelsky earlier was on the faculty of Brooklyn College of CUNY, and the University of Houston.

Cehelsky holds a doctorate in comparative politics from Columbia University. She is a fellow of the American Association for the Advancement of Science

URA is a consortium of 89 leading research-oriented universities primarily in the United States, with members also in Canada, Japan, and Italy. The not-for-profit URA Corporation was founded in 1965 for management and operation of research facilities in the national interest at the behest of President Lyndon Johnson's Science Advisory Committee and the National Academy of Sciences. Presidents of participating universities organized their scientific and administrative talent toward this end, within the URA governing structure.