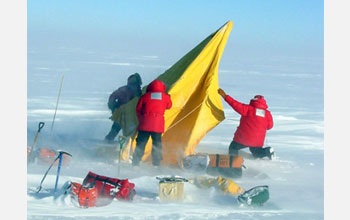 Setting up a field camp in Antarctica.

New research that integrates seismic recordings with Global Positioning System (GPS) measurements indicates that a 7,000-square-mile region of the Whillians Ice Stream in West Antarctica moves more than two feet twice every day in an earthquake-like pattern equivalent to a Magnitude 7 temblor.

The findings were published in this week's edition of the journal Nature by a group of scientists that includes investigators from Washington University in St. Louis, Penn State University and the University of Newcastle in Great Britain. The National Science Foundation (NSF) funded the U.S. researchers.

Seismologists use the magnitude scale to describe the seismic energy released by an earthquake. An earthquake measured at between 7.0 and 7.9 on the scale is considered "major," and can cause serious damage over large areas in populated regions of the world. Not including the events described in the new findings, there are an estimated 20 such quakes worldwide each year.

In an earthquake, stress builds between two plates on the Earth's crust as the energy of their movement accumulates. Finally, one plate or the other moves, causing shudders and jolts at the Earth's surface.

A similar movement was observed in the Whillians Ice Stream by the research team. Using an array of 19 GPS sensors and seismic sensors deployed as part of the NSF-funded TransAntarctic Mountains Seismic Experiment (TAMSEIS) and the Global Seismic Network, the researchers say they have measured what they are calling a "stick-slip" interaction on the massive ice stream. The seismic signals were recorded as far away as Australia, a distance of more than 6,400 kilometers (4,000 miles).

The "stick-slip" pattern in the ice sheet runs counter to the image of ice streams as flowing at a constant speed, and may be significant in understanding the wider range of ice-stream dynamics.

Scientists know surprisingly little about the physics of stick-slip ice-sheet movement and are eager to know more as they try to comprehend the wide-ranging dynamics of ice sheets and how ice streams--the "frozen rivers" that flow from the interiors of ice sheets into the oceans--may react to a warming climate.

Although this study was restricted to a single ice stream, the new findings document behavior that runs counter to how scientists generally have perceived glacial motion.

"Glaciologists model the flow of glaciers using the assumption that it's basically a kind of creeping kind of motion. But recently we've been seeing seismic signals coming from a number of ice streams and glaciers, and no one's been able to interpret them," said Douglas Wiens, a professor of Earth and planetary sciences at Washington University in St. Louis, who led the research team.

Sridhar Anandakrishnan, one of the Penn State investigators, said, "This is a different mode of ice-stream movement that could be really important for understanding how all ice streams develop and evolve."

The "stick-slip" events on the Whillians Ice Stream occur twice a day and appear to be related to the daily tidal action of the Ross Sea. During each slip, a 96 by 193 kilometer (60 by 120 mile) region of the the ice stream, which is 609 meters (almost 2000 feet) thick, moves as much as .67 meters (2.2 feet) in about 25 minutes. Because of the relatively long time over which the slip takes place, scientists standing right on the slipping ice stream feel nothing. In contrast, most rock earthquakes, which can take place in as little as a few seconds, are felt intensely by people in the area.

The new findings themselves are neutral in their implications about global warming. But they are significant, because they add another piece to the mosaic of scientific understanding of ice dynamics. A comprehesive report issued last November by the Intergovernmental Panel on Climate Change (IPCC) indicates that a major uncertainty in the predictions of change made by current climate models is the level of future sea level rise caused by ice-sheet changes. The IPCC report further notes that the dynamics of ice sheets is currently a major unknown factor in efforts to predict sea-level rise.

"What we don't want to do is to indicate that these signals tell us that global warming is getting worse," said Wiens. "It's more that we need to better to understand the physics of these masses of ice."

But, he added, for all of the scientific concern about the fate of the ice sheets in a warming climate, much more needs to be learned about why or how ice sheets and ice streams behave the way they do.

"A big puzzle is why this particular ice stream shows this slip-stick behavior and others don't, and we don't really understand why," Wiens said. "Our results show that the stick-slip motion originates from a sticky region on the bed of the ice stream where friction is higher, perhaps due to the absence of water. Also we know that this ice stream is slowing down. Perhaps the sticky spot is responsible for both phenomena."

Added Anandakrishnan, "What is apparent from these results is that the conditions beneath the glaciers and ice streams is critically important in the flow of those masses of ice.  Without a better understanding of the subglacial environment, our ability to model and predict future behavior of ice sheets and sea level will be hampered."