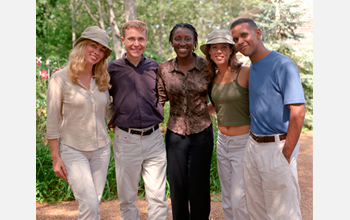 The latest wave of World Values Surveys shows happiness increased worldwide from 1981 to 2007.

The United States ranks ahead of more than 80 countries, but below 15 others in happiness levels, according to new World Values Survey data released in the July issue of the journal Perspectives on Psychological Science.

The World Values Survey (WVS) is the work of a global network of social scientists who perform periodic surveys addressing a number of issues. The latest surveys, taken in the United States and in several developing countries, showed increased happiness from 1981 to 2007 in 45 of 52 countries for which substantial time series data was available. Survey analysis was funded by the National Science Foundation.

Researchers responsible for the analysis, from the University of Michigan's Institute for Social Research (ISR) in Ann Arbor, say the overall rise in reported happiness is due to greater economic growth, democratization and social tolerance.

Denmark tops the list of surveyed nations, along with Puerto Rico and Colombia. A dozen other countries, including Ireland, Switzerland, the Netherlands, Canada and Sweden also rank above the United States, which maintains about the same relative position as it did in WVS's 2000 survey.

"Though by no means the happiest country in the world, from a global perspective the U.S. looks pretty good," says Ronald Inglehart, a political scientist at the university, who directs the study. "The country is not only prosperous; it ranks relatively high in gender equality, tolerance of ethnic and social diversity and has high levels of political freedom."

Interestingly, countries whose respondents reported high levels of happiness were much likelier to be democracies than were countries that rank lower in terms of their citizens' happiness.

Though happiness levels are rising in the world as a whole, the report comes at an interesting time for Americans, when recent public opinion polls report striking dissatisfaction with the direction of U.S. affairs.

According to an April 2008 New York Times/CBS News public opinion poll, some 81 percent of Americans say they believe the country is on the "wrong track." The response is the most negative in the 25 years pollsters have asked the question.

In addition to the war in Iraq and the threat of terrorism, observers contribute high dissatisfaction to talk of potential recession, home foreclosure rates and unemployment.

"Americans' dissatisfaction with the country's current direction pulls down their sense of subjective well-being," says Inglehart. "But this is partly offset by other factors. The fact that Americans live in a free and tolerant society has more impact on happiness than economic prosperity or even additional income.

"Ultimately, the most important determinant of happiness is the extent to which people have free choice in how to live their lives."

Even so, researchers note that wealth is important for happiness. Not surprisingly, three of the world's poorer countries with long histories of repressive government--Moldova, Armenia and Zimbabwe--are at the bottom of the happiness list. Virtually all of the lowest ranking nations struggle with legacies of authoritarian rule and widespread poverty.

"The relative importance of economic prosperity to happiness changes as societies get richer," says Inglehart. "In low-income countries, one's economic situation has a huge impact on happiness. But among more prosperous countries, political freedom and social tolerance play a greater role in determining how happy people are."

They also play a role in improving a nation's long-term happiness.

National Happiness Can Be Improved for the Long Term

For example, the United States, though ranking relatively high in many factors that contribute to happiness, has room for improvement in such areas as social solidarity and universal health coverage, says Inglehart. "To some extent, well-designed social policy can help raise U.S. happiness levels even more," he says. "Policies that help increase the society's sense of solidarity and tolerance may also help."

The World Values Survey has measured happiness since 1981.  Its researchers have interviewed more than 350,000 people.