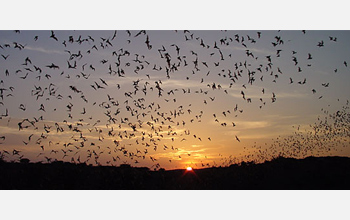 Not many people think about what it's like to be a bat, but for those who do, it's enlightening and potentially groundbreaking for understanding aspects of the human brain and nervous system.

Cynthia Moss, a member of the Neuroscience and Cognitive Science program at the University of Maryland, College Park, Md., is one of few researchers who spend time trying to get into the heads of bats.

Her new research suggests there is more to studying bats than figuring out how they process sound to distinguish environments. Partially supported by the National Science Foundation, her research paper appears in the June 18 online edition of the Proceedings of the National Academy of Sciences.

"For decades it's been recognized that a bat's voice produces sounds that give the bat information about the location of objects," says Moss. "We're now recognizing that every time a bat produces a sound there are changes in brain activity that may be important for scene analysis, sensorimotor control and spatial memory and navigation."

The research could help neurobiologists understand mechanisms in the human brain and ultimately benefit human health, but that may not happen for some time as more research is needed.

Moss and her colleague, Nachum Ulanovsky from the Weizmann Institute of Science in Israel, reviewed more than 100 studies and determined the brief calls emitted through a bat's mouth or nostrils and their returning echoes play a pivotal role in motor control and have other behavioral implications.

In short, echoes from a bat's voice cause the bat to turn its head and ears, and give the bat's brain a description of the scene. The echoes also cue a bat's memory about its environment so it can safely fly between points.

"Our review highlights new research findings suggesting that the bat's vocal production does more than yield echoes," says Moss. "We're learning every time the bat produces a vocalization, there are changes in brain activity that are essential to complex behaviors."

For example, when a bat pursues prey, a moth or some other insect, it computes the 3D location of objects in its environment--a tree, a wall or a lamppost--from information carried by the echoes of high-pitched vocal chirps produced at rates of 2-150 chirps per second.

Research shows it actually uses these echoes to remember details of the environment in which it operates, displaying a very sensitive spatial memory component.

The vocalizations tell the bat the horizontal and vertical positions of its prey from differences in the arrival time, intensity, and variety of echoes it receives. It estimates target range from the time delay between the outgoing vocalization and returning echo. It also uses its sonar system to assess the size of a target. Finally, when zeroed in, it swoops down on its prey.

Researchers are able to draw correlations between how bats and humans process information to perform functions. Both are mammals having the same basic brain organization, which leads to obvious comparisons.

According to Moss, bats engage in vocal-motor behaviors to generate signals to probe the environment, while some blind humans produce tongue clicks to generate sounds for echolocation.

Both bats and humans engage in so-called "motor behaviors" that shape their perceptions of the world. A bat turns its head, moves its ears, and changes its flight path in response to echo information from the environment. A human moves his eyes or turns his head to augment his perception of auditory and visual signals.

"All of these motor behaviors influence the animal's perception and representation of the environment," says Moss. "But of interest to us is the idea that these vocal-motor behaviors contribute to environmental perception, memory, and spatial planning far beyond the processing of sound."

"It may be that some of the information we learn from the bat gives us a window into understanding mechanisms of the human brain," says Moss. "But those outcomes are a little bit down the road."