Metals Shape Up with a Little Help from Friends 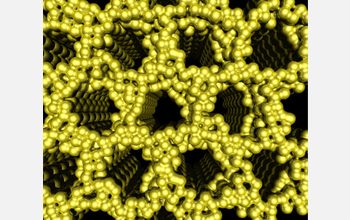 For 5,000 years the only way to shape metal has been by the "heat and beat" technique. Even with modern nanotechnology, metalworking involves carving metals with electron beams or etching them with acid.

Now Cornell researchers have developed a method to self-assemble metals into complex configurations with structural details about 100 times smaller than a bacterial cell by guiding metal particles into the desired form using soft polymers.

"I think this is ingenious work that takes the fundamental concepts of polymer science and applies them to make metals in a totally novel way," said Andrew Lovinger, the director of the Polymers Program at the National Science Foundation. "In so doing, it opens the door to all kinds of new possibilities."

Applications include making more efficient and cheaper catalysts for fuel cells and industrial processes, and creating "plasmonic" surface structures capable of carrying more information across microchips than conventional wires do.

"The polymer community has tried to do this for almost 20 years," said Uli Wiesner, Cornell professor of materials science and engineering, who reports on the new method in the June 27, 2008, issue of the journal Science. "But metals have a tendency to cluster into uncontrolled structures."

Wiesner's research team has now developed a method to overcome this globby inclination of metals. First, metal nanoparticles measuring about 2 nanometers (nm) or 10-20 atoms in diameter, are coated with an organic material known as a ligand. The ligands form thin jackets around the metal atoms, changing their surface chemistry. Keeping the ligand jackets thinly tailored is a key factor that permits the volume of metal in the final structure to be large enough to hold its shape when the organic materials are eventually removed.

The jacketed metal atoms are then put in a solution containing block co-polymers, a kind of nano-scaffolding material. The innovative use of the ligands allows for the metal nanoparticles to be dissolved--even at high concentrations--in such a solution. A block co-polymer is made up of two different long chains, or blocks, of molecules linked together to form a predictable pattern. In the experiment, depicted in the illustration at right, ligand-coated platinum nanoparticles (shown as blue and gray balls) are nestled amongst the block co-polymers (shown as blue and green strands).

After the ligand-coated nanoparticles and polymers assemble in regular patterns, the material is heated to high temperatures in the absence of air to convert the polymers to a carbon scaffold. The scaffold is then allowed to cool. Because the metal nanoparticles have a very low melting point, without the carbon scaffold they would stubbornly fuse together in an uncontrolled fashion. Using this process, the carbon scaffold can be etched away with an acid, leaving behind a structured solid metal.

The Cornell group used the new method to create a platinum structure (see illustration above) with uniform hexagonal pores, each on the order of 10 nm across--a much larger diameter than previous attempts have been able to produce. Platinum is, so far, the best available catalyst for fuel cells, and a spacious pore structure allows fuel to flow through and react over a larger surface area.

In addition to making porous materials for catalysis, the researchers said, the technique could be used to create finely structured metals on surfaces, a key to transform the field of plasmonics, which studies the interactions among metal surfaces, light, and density waves of electrons, known as plasmons. Currently, researchers are investigating the use of plasmons to transmit more information across metal wires in microchips and to improve optics applications, like lasers, displays, and lenses.

The research team was led by Uli Wiesner at Cornell University and included Francis DiSalvo, the J.A. Newman Professor of Chemistry and Chemical Biology, and Sol Gruner, the John L. Wetherill Professor of Physics, both at Cornell, and other undergraduate and graduate students.

The research was funded by the National Science Foundation and the Cornell Fuel Cell Institute.