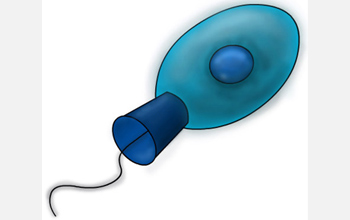 An illustration of a choanoflagellate, a unique single-cell organism.

What do humans and single-celled choanoflagellates have in common? More than you'd think. New research into the choanoflagellate genome shows these ancient organisms have similar levels of proteins that cells in more complex organisms, including humans, use to communicate with each other.

According to a paper published last week in the Proceedings of the National Academies of Science, these findings help confirm choanoflagellates' role as an evolutionary link between single-celled and multi-celled organisms. They also contend that these insights into the organism's genome may mean that the proteins used to help cells communicate may have other roles as well. The researchers are from the University of California, San Francisco and the European Molecular Biology Laboratory in Heidelberg, Germany.

Choanoflagellates, or at least their ancestors, have long been suspected as being the bridge between microorganisms with only one cell and metazoan, or multi-cellular organisms. There are many clues that lead to this conclusion, including the fact that choanoflagellates are similar to the individual cells in ocean sponges and unlike most other flagellates, they use their flagellate, or tail, to push themselves through water, rather than being pulled by it.

By analyzing the recently-sequenced choanoflagellate genome, the researchers discovered another similarity between choanoflagellates and most metazoans--their genetic code caries the markers of three types of molecules that cells use to achieve phospho-tyrosine signaling proteins.

Animals depend on tyrosine phosphorylation to conduct a number of important communications between their cells, including immune system responses, hormone system stimulation and other crucial functions. These phospho-tyrosine signaling pathways utilize a three-part system of molecular components to make these communications possible.

Without these three molecules to help our cells 'write,' 'read' and 'erase' chemical messages between them, our bodies would never be able to conduct the complex tasks needed to survive such as reproduction, digesting food or even breathing.

Other genome analysis showed that some microorganisms contain some of these molecules in small levels, but never all three. This makes sense considering these organisms don't need the tools to communicate between cells since they are made up of only one cell. What makes choanoflagellates unique, however, is that they have all three of these molecules. What's more, they have relatively large quantities of them in amounts commonly seen in larger metazoan organisms.

The researchers conclude that the presence of the full three-component signaling system may have played a role in the development of metazoan organisms whose cells could communicate with each other in complex ways.

"It shows how evolution might work," says Wendell Lim, a researcher at the University of California, San Francisco, who was one of the authors of the paper. "Probably there was an ancestor to these organisms that first developed these chemicals."

The research also suggests that the genetic ability to express these three molecules may potentially give cells a wide range of communication possibilities, including uses within single cells.

To David Pincus, the lead author of the article, the research suggests that for a single cell with these molecules "there's a certain amount of signaling you can do, and you allocate that apparently for whatever function you want."

Studying these other functions, the authors believe, may yield important insights into how to treat and correct abnormal cell development in cancer patients and other disorders.