Results will lead to better understanding of power grid, other impacts of solar storms 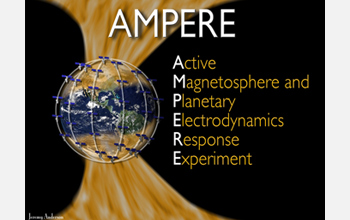 The AMPERE experiment will allow atmospheric scientists to track the effects of space weather.

Global and real-time "space weather" observations of near-Earth space--and the solar storms that can knock out electric power grids--is about to happen for the first time, thanks to funding from the National Science Foundation (NSF).

Scientists at the Johns Hopkins University Applied Physics Laboratory (APL) in Laurel, Md., have been awarded an NSF grant to perform an experiment called the Active Magnetosphere and Planetary Electrodynamics Response Experiment (AMPERE).

AMPERE will use the Iridium constellation of communications satellites to measure the electric currents that link Earth's atmosphere and space. By measuring this key component of the space weather system, AMPERE will allow 24/7 tracking of Earth's response to supersonic blasts of plasma ejected from the sun.

"Earth's space environment can completely reconfigure in as little as 30 minutes," says APL's Brian Anderson, lead scientist on AMPERE. "With a new ability to continually monitor these electric currents, we can track the transformations of our planet's space environment for the first time, and gain a new understanding of how Earth reacts to the sun."

AMPERE will also enable advances that could transform our understanding of Earth's space environment, and improve space weather forecasting, according to researchers affiliated with the project.

"Enhancing the observational resources for space weather research and operations is a critical objective of the U.S. National Space Weather Program, in which NSF participates," said Therese Jorgensen, program director in NSF's Division of Atmospheric Sciences, which funds AMPERE.

"AMPERE will revolutionize our ability to monitor and investigate the energy input to the upper atmosphere due to space weather," she said. "Innovative collaboration among academic scientists and industry partners has made AMPERE possible."

APL is collaborating with Iridium Satellite LLC and the Boeing Company to make use of the unique capabilities and orbits of the more than 70 Iridium satellites, which provide global telephone and data services.

"We don't have enough satellites making these measurements," says Anderson. "It's like trying to understand a hurricane with only a few weather stations measuring temperature. AMPERE will give us the first-ever global, real-time picture of what's really happening during these dynamic space weather storms."

The Iridium satellites already detect the electric currents through which they pass, but new software developed under the NSF grant will increase the number of measurements 100-fold, enabling advances in our ability to observe the near-Earth space environment, say space weather scientists.

More than 800 satellites orbit Earth today, forming the backbone of many modern communications and navigation systems.

Storms in our space environment driven by solar disturbances can damage these satellites, and can also pose dangers to astronauts, high-altitude aircraft and electric power grids.

During geomagnetic storms, the electric currents AMPERE will observe can exceed 10 million amperes--one million times what household wiring can handle--and deliver up to a terra-watt of power to the upper reaches of the atmosphere, the ionosphere and thermosphere.

A typical power plant is designed to deliver one thousandth that amount, about one gigawatt of power.

This energy input causes a variety of harmful effects including: atmospheric heating that changes the orbits of satellites nearest Earth; disturbances that disrupt radio communications and corrupt GPS navigation systems; spacecraft charging, which damages electrical systems; and, on the ground, currents that can destroy transformers and over-stress generators, causing power grid disruptions and major blackouts.

The currents AMPERE will measure are also closely linked to enhanced radiation levels in space, posing risks to astronauts and spacecraft.