Sorry, Charlie, You and Nemo Aren't the Only Fish That Talk 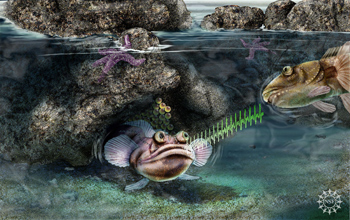 An artist's representation of the midshipman fish singing to attract a mate.

View a video interview with biologist Andrew Bass of Cornell University and a guided tour of fish communicating.

Talking fish are no strangers to Americans. From the comedic portrayal of "Mr. Limpet" by Don Knotts, to the children's Disney favorite, "Nemo," fish can talk, laugh and tell jokes--at least on television and the silver screen. But can real fish verbally communicate? Researchers say, "Yes," in a paper published in the July 18 issue of the journal Science. Further, the findings put human speech--and social communications of all vertebrates--in evolutionary context.

By mapping the developing brain cells in newly hatched midshipman fish larvae and comparing them to those of other species, Andrew Bass and his colleagues, Edwin Gilland of Howard University and Robert Baker of New York University, found that the neural network behind sound production in vertebrates can be traced back through evolutionary time to an era long before the first animals ventured onto dry land. The neural circuitry that enables human beings to verbally communicate--not to mention birds to sing, and frogs to "ribbit"--was likely laid down hundreds of millions of years ago with the hums and grunts of fish.