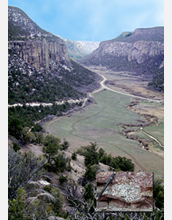 Geoscientists have long presumed that, like today, the tropics remained warm throughout Earth's last major glaciation 300 million years ago.

New evidence, however, indicates that cold temperatures in fact episodically gripped these equatorial latitudes at that time.

Geologist Gerilyn Soreghan of Oklahoma University found evidence for this conclusion in the preservation of an ancient glacial landscape in the Rocky Mountains of western Colorado. Three hundred million years ago, the region was part of the tropics. The continents then were assembled into the supercontinent Pangaea.

Soreghan and colleagues published their results in the August 2008, issue of the journal Geology.

Climate model simulations are unable to replicate such cold tropical conditions for this time period, said Soreghan. "We are left with the prospect that what has been termed our 'best-known' analogue to Earth's modern glaciation is in fact poorly known."

"This study is an example of the wealth of untapped climate information stored in Earth's 'deep time' geologic record millions of years ago," said H. Richard Lane, program director in NSF's Division of Earth Sciences, which funded the research. "These kinds of discoveries may greatly improve our understanding and prediction of modern climate change."

As a result of the close proximity of the ancient tropical glaciers to the sea, the toes of the glaciers were likely less than 500 meters above sea level--much lower than the tropical glaciers of Earth's recent glacial times.

"The Late Paleozoic tropical climate was not buffered against cold from the high latitudes, as everyone had thought," said Soreghan. "The evidence we found indicates that glaciers were common at this time, even in tropical latitudes. This calls into question traditional assumptions of long-lasting equatorial warmth in the Late Paleozoic, and raises the possibility of large-scale and unexpected climate change in the tropics during that time."