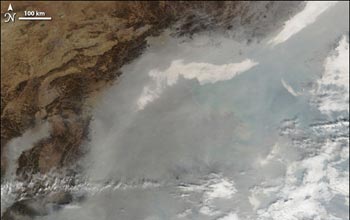 As the Summer Olympics in Beijing kicks off this week, the event is giving scientists a once-in-a-lifetime opportunity to observe how the atmosphere responds when a heavily populated region substantially curbs everyday industrial emissions.

The aerial vehicles were developed by Advanced Ceramics. Instruments on the aircraft can measure smog and its effects on meteorological conditions.

Data-gathering flights will originate at the South Korean island of Cheju, located about 1,165 kilometers (725 miles) southeast of Beijing. Cheju is in the projected path of pollution plumes that begin in various cities in China, including the capital.

Information from the flights will be combined with measurements by satellites and observatories on the ground that will track dust, soot and other pollution aerosols that travel from Beijing and other parts of China in so-called atmospheric brown clouds.

The instruments will observe pollution transport patterns as Beijing enacts its "great shutdown" for the Summer Olympic Games. Chinese officials have reduced industrial activity by as much as 30 percent and mandated cuts in automobile use by half, to safeguard the health of competing athletes immediately before and during the games.

"Thanks to the concern of Olympic organizers, the Chinese government, and the cooperation of the Korean government, we have a huge and unprecedented opportunity to observe a large reduction in everyday emissions from a region that's very industrially active," said atmospheric scientist V. Ramanathan of Scripps Institution of Oceanography (SIO), the lead investigator of CAPMEX.

"CAPMEX will be the very first UAV campaign in east Asia for air pollution and cloud interaction studies," added CAPMEX field campaign co-lead investigator Soon-Chang Yoon, a researcher at the School of Earth and Environmental Sciences at Seoul National University in Korea. "This will be a very interesting experiment that can never happen again."

Satellite and ground observations began on August 1. Pre-inspection test flights are scheduled to begin August 9, with the field campaign expected to run through September 30.

"Black carbon in soot is a major contributor to global warming," said Ramanathan. "By determining the effects of soot reductions during the Olympics on atmospheric heating, we can gain much needed insights into the magnitude of future global warming."

Ramanathan's team has revolutionized the gathering of atmospheric data through the use of AUAVs that enable researchers to form dimensional profiles of clouds and other atmospheric masses at relatively low cost.

With CAPMEX, scientists hope to improve their ability to deliver such assessments of particulate pollution effects more rapidly and enhance their value as a policymaking tool.

Miniaturized instruments on the aircraft measure a range of properties such as the quantity of soot and size of the aerosols upon which cloud droplets form. The instruments also record variables such as temperature, humidity and the intensity of sunlight that permeates clouds and masses of smog.

For CAPMEX, photonics instruments will be added to the aircrafts' payloads to help calculate the specific contributions of various aerosols to atmospheric heating.

Other new instruments such as auto-leveling platforms will enable researchers to improve estimates of how much dimming of sunlight takes place at the ocean surface because of pollution aerosols in the atmosphere.