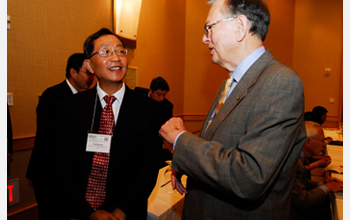 Approximately 15 professors, deans and other professionals in the computing sciences from the People's Republic of China came to Arlington, Va. last month for a summit with their U.S. counterparts. The one-day meeting gave participants the chance to discuss challenges and opportunities facing computing scholars from both sides of the Pacific, and it reflected the growing level of cooperation between the academic research communities in both countries.

The event was organized by the DIMACS Center at Rutgers University and was sponsored by the National Science Foundation (NSF), which also hosted the event. Several NSF leaders, including NSF Director Arden L. Bement, Jr., had an opportunity to speak to summit participants and listen in on the event. The Chinese delegation was led by Jiaquang Sun, the vice director of the National Natural Science Foundation of China, and included leaders from several of China's leading research universities.

China is rapidly becoming a world leader in information technology research and development, and many of the country's research universities rival their western counterparts in developing new patents and other innovations. While some may perceive China's growth in the field as a threat to the U.S. economy, others argue that fostering stronger ties between researchers in both countries can be mutually beneficial.

"Science and technology have always been a powerful force for social and economic progress and for international diplomacy," Bement said in his opening remarks at the summit. "At no time has that been more true than today."

In addition to sponsoring the summit, Bement added, NSF has opened an office in Beijing to create more opportunities for collaborations between scientists and researchers from both countries. The opening of that office was the catalyst for the first such U.S.-China Computer Science Leadership Summit.

According to Fred Roberts, the DIMACS Center's director, one topic that generated an animated discussion was the increasingly multidisciplinary nature of modern science and the growing connections between computer science and other disciplines such as biology and the social sciences. Another topic of mutual interest involved the role of computer science in solving some of the challenges facing the human race, including energy shortages, climate change, health care and responding to natural disasters.

"There was great enthusiasm on both sides to continue this dialogue in the future," Roberts said.

The event also gave participants from both sides an opportunity to discuss their own research with each other and make connections for future collaborations. Leaders from both delegations expressed their interest in continuing these summits in the future.

"I think the summits for exchanges between scientists in China and the U.S. are helpful," said Sun. "I will push the summit actively."

This year's summit grew out of a similar event held at Beihang University in China. In May 2006, deans and directors of major universities in the U.S. visited China to establish a dialogue between leaders of major computer science departments in both countries and to allow U.S. scholars an opportunity to gain insight into current and future trends in China's information technology research activities.