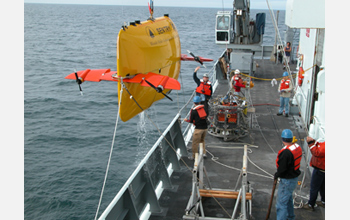 Sentry, an autonomous undersea vehicle, was used for the first time this month.

The first scientific mission with Sentry, a newly developed robot capable of diving as deep as 5,000 meters (3.1 miles) into the ocean, has been successfully completed by scientists and engineers from the Woods Hole Oceanographic Institution (WHOI) and the University of Washington (UW).

Sentry is a state-of-the-art, free-swimming underwater robot that can operate independently, without tethers or other connections to a research ship.

The autonomous underwater vehicle, or AUV, is pre-programmed with guidance for deep-water surveying, but it can also make its own decisions about navigation on the terrain of the seafloor.

"This investment into emerging technologies is paying off in delivering state-of-the-art science support," said Julie Morris, director of NSF's Division of Ocean Sciences. "In the near future, Sentry will conduct high-resolution oceanographic surveys that would be otherwise impossible."

Working in tandem with sonar instruments on the UW-operated research vessel Thomas G. Thompson and with photo-mapping by WHOI's TowCam seafloor imaging system, Sentry gathered the most precise maps to date of seafloor features known as Hydrate Ridge and Axial Volcano off the coast of Oregon and Washington.

"We are changing the way ocean science is done, launching a new era in which an ensemble of technologies will provide us with an increasing capacity for exploring and interacting with the global oceans," said John Delaney, chief scientist of the expedition and principal investigator for the UW-led regional observatory in the planned OOI.

The one-of-a-kind, WHOI-built AUV--which was largely funded by NSF--made six dives during the July 22 to August 5 expedition.

Sentry surveyed 212 linear kilometers of seafloor, or about 53 square kilometers, as it traced parallel lines like a lawn-mower making a pattern across a yard.

"Sentry had a very successful introduction," said Dana Yoerger, the lead WHOI engineer for the vehicle. "We had tested the AUV as best we could before we got out here, but the steep terrain of the deep sea is quite a different matter."

The AUV can collect the data needed to make seafloor maps at a resolution of less than one meter. On this first cruise, Sentry collected as many as 60 million individual soundings of seafloor depth in a single dive.

Powered by more than 1,000 lithium-ion batteries-similar to those used in laptop computers, though adapted for extreme pressures, Sentry dove for as long as 18 hours and 58 kilometers, with the potential for longer trips in the future.

Sentry is designed to swim like a fish or fly like a helicopter through the water. The sleek hydrodynamic design allows the vehicle to descend quickly from the sea surface to the depths (about 3,500 meters per hour). The novel shape also gives the vehicle tremendous stability and balance while cruising through bottom currents.

The vehicle has thrusters built into its foils, or wings. Like an airplane, the foils allow the vehicle to gain lift or drag or directional momentum, as needed.

When necessary, the AUV also can hover over the bottom for close-up inspections, navigational decision-making, and for rising up and down over rugged seafloor terrain. The design allows the vehicle to start, stop, and change directions, whereas many AUVs tend to travel in one direction.

The AUV steers itself with a magnetic compass; long-baseline (LBL) navigation triangulated from underwater beacons; a sophisticated inertial guidance system (INS); and, when within 200 meters of the bottom, an acoustic sensor that can track the vehicles' direction and speed with incredible precision.

"Sentry is a true robot, functioning on its own in the deep water," said Rod Catanach, a WHOI engineer who works with Sentry. "The vehicle is completely on its own from the time it is unplugged on the deck and cut loose in the water."

With this mission successfully completed, Sentry is now ready to join the National Deep Submergence Facility (NDSF), a federally funded center based at WHOI that operates, maintains, and coordinates the use of vital deep ocean vehicles for the U.S. oceanographic community.

Sentry will replace the Autonomous Benthic Explorer (ABE), Sentry's predecessor in the NDSF and a pioneer in deep-diving vehicle operations since 1996.

Eventually, vehicles like Sentry and its successors will plug into and interact with the ocean observatory system, using the power charging systems and high speed communications delivered by the submarine networks.

Funding for the development of Sentry also was provided by the Russell Family Foundation, WHOI's Deep Ocean Exploration Institute, the Comer Science and Education Foundation, and WHOI's Access to the Sea program.

Funding for the OOI mapping cruise was provided by NSF through the Consortium for Ocean Leadership; by Arizona State University; and by the UW School of Oceanography.