Greenland Ice Core Reveals History of Pollution in the Arctic 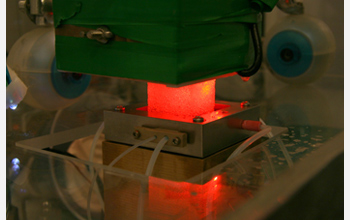 A Greenland ice core reveals pollution in the Arctic region was higher 100 years ago.

View a video interview of researcher Joe McConnell of the Desert Research Institute.

New research, reported this week in the online early edition of the Proceedings of the National Academy of Sciences, finds that coal burning, primarily in North America and Europe, contaminated the Arctic and potentially affected human health and ecosystems in and around Earth's polar regions.

Detailed measurements from a Greenland ice core showed pollutants from burning coal--the toxic heavy metals cadmium, thallium and lead--were much higher than expected. The catch, however, was the pollutants weren't higher at the times when researchers expected peaks.

"Conventional wisdom held that toxic heavy metals were higher in the 1960s and ‘70s, the peak of industrial activity in Europe and North America and certainly before implementation of Clean Air Act controls in the early 1970s," said Joe McConnell, lead researcher and director of DRI's Ultra-Trace Chemistry Laboratory.

"But it turns out pollution in southern Greenland was higher 100 years ago when North American and European economies ran on coal, before the advent of cleaner, more efficient coal burning technologies and the switch to oil and gas-based economies," McConnell said.

In fact, the research showed pollutants were two to five times higher at the beginning of the previous century than today. Pollution levels in the early 1900s also represented a 10-fold increase from preindustrial levels.

Continuous, monthly and annually averaged pollution records taken from the Greenland ice core dating from 1772-2003 produced the results. And although data showed heavy-metal pollution in the North Atlantic sector of the Arctic is substantially lower today than a century ago, McConnell and his research partner, Ross Edwards, an associate research professor at DRI, said there is still cause for concern.

"Contamination of other sectors may be increasing because of the rapid coal-driven growth of Asian economies," they wrote in the report. They argued the consequence may be greater risk to the food chain as toxic heavy metals from industrial activities in Asian nations are transported through the atmosphere and deposited in the polar regions.

Food chain contamination through toxic metal absorption from both the environment and from consumption of contaminated food sources could make its way to humans, who feed on long-lived land and marine animals such as caribou, seals and whale.

"Impacts on human health in the Arctic region haven't been determined," said McConnell. But he suggested cleaner burning coal technologies, or better yet reduced reliance on coal burning, may head off the potential problem.