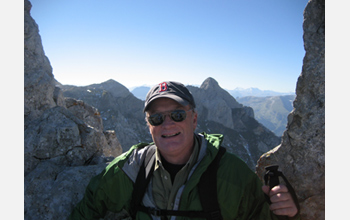 Geophysicist Robert Detrick has been appointed director of NSF's Division of Earth Sciences.

The National Science Foundation (NSF) Directorate for Geosciences has appointed Robert Detrick of the Woods Hole Oceanographic Institution (WHOI) as its new director of the Division of Earth Sciences.

Detrick is currently a senior scientist and vice president for Marine Facilities and Operations at WHOI, and will begin his NSF position on Nov. 3, 2008.

"We are delighted that Bob Detrick will be joining NSF in this important national leadership role," said Tim Killeen, NSF assistant director of Geosciences. "This appointment augurs well for the earth sciences, and the geosciences in general. I'm looking forward to working closely with him."

Detrick is a geophysicist and seismologist. His research has focused primarily on the structure and evolution of oceanic crust, the size, depth and physical properties of ridge crest magma chambers, and the effect of hotspots on the thermal evolution of the lithosphere.

Detrick is a former member and chair of NSF's Advisory Committee for Geosciences. He is a Fellow of the American Geophysical Union and a former president of its Tectonophysics Section. Detrick has authored or co-authored more than 100 papers in the peer-reviewed literature, including 14 papers in Nature and Science.

During his tenure at WHOI, he oversaw several large projects, including the development of the institution's successful proposal to be the implementing organization for the coastal and global components of the NSF-funded Ocean Observatories Initiative, and the institution's effort to design and build a replacement human occupied vehicle.

Detrick joined the WHOI staff in 1991 as a senior scientist after 13 years as a professor at the University of Rhode Island. He received a bachelor's degree in geology and physics from Lehigh University in 1971 and a master's degree from the University of California, San Diego in marine geology in 1974. After a brief stint as an exploration geophysicist for Standard Oil Company of California, he earned his doctorate from the MIT/WHOI Joint Program in Oceanography in 1978.

NSF's Division of Earth Sciences supports basic research and education into the structure, composition, and evolution of the Earth, and the life it supports. The Division has programs in geobiology and low-temperature geochemistry, geomorphology, sedimentary geology and paleobiology, hydrology, geophysics, tectonics, and petrology and geochemistry.

The results of this research are leading to a better understanding of the Earth's dynamic history, and the distribution of its natural resources, as well as providing the basic knowledge needed to predict and mitigate the effects of geologic hazards such as earthquakes, volcanic eruptions, floods and landslides.