Molten plume of material beneath Yellowstone cooler than expected 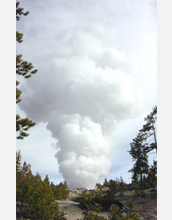 Yellowstone National Park and its famous geysers are the remnants of an ancient supervolcano.

The geysers of Yellowstone National Park owe their existence to the "Yellowstone hotspot"--a region of molten rock buried deep beneath Yellowstone, geologists have found.

But how hot is this "hotspot," and what's causing it?

In an effort to find out, Derek Schutt of Colorado State University and Ken Dueker of the University of Wyoming took the hotspot's temperature.

The scientists published results of their research, funded by the National Science Foundation (NSF)'s division of earth sciences, in the August, 2008, issue of the journal Geology.

"Yellowstone is located atop of one of the few large volcanic hotspots on Earth," said Schutt.  "But though the hot material is a volcanic plume, it's cooler than others of its kind, such as one in Hawaii."

When a supervolcano last erupted at this spot more than 600,000 years ago, its plume covered half of today's United States with volcanic ash. Details of the cause of the Yellowstone supervolcano's periodic eruptions through history are still unknown.

Thanks to new seismometers in the Yellowstone area, however, scientists are obtaining new data on the hotspot.

Past research found that in rocks far beneath southern Idaho and northwestern Wyoming, seismic energy from distant earthquakes slows down considerably.

Using the recently deployed seismometers, Schutt and Dueker modeled the effects of temperature and other processes that affect the speed at which seismic energy travels. They then used these models to make an estimate of the Yellowstone hotspot's temperature.

They found that the hotspot is "only" 50 to 200 degrees Celsius hotter than its surroundings.

"Although Yellowstone sits above a plume of hot material coming up from deep with the Earth, it's a remarkably 'lukewarm' plume," said Schutt, comparing Yellowstone to other plumes.

Although the Yellowstone volcano's continued existence is likely due to the upwelling of this hot plume, the plume may have become disconnected from its heat source in Earth's core.

"Disconnected, however, does not mean extinct," said Schutt. "It would be a mistake to write off Yellowstone as a 'dead' volcano. A hot plume, even a slightly cooler one, is still hot."