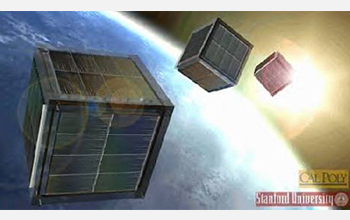 A new series of CubeSats, small satellites in the shapes of cubes, will soon take to the skies. Using the CubeSats, scientists will conduct space weather research impossible with other instruments.

The National Science Foundation (NSF) has awarded a grant to SRI International, an independent non-profit research and development organization based in Menlo Park, Calif., to carry out the first space weather CubeSat mission.

Developed through joint efforts, California Polytechnic State University and Stanford University introduced CubeSats to academia as a way for universities throughout the world to enter the realm of space science and exploration.

According to atmospheric scientists, CubeSats have the potential to be excellent platforms for technology development and small science missions, and promote student involvement in design, fabrication and flight missions.

"One of the goals is to help train future space scientists and aerospace engineers," said Therese Moretto Jorgensen, program director in NSF's Division of Atmospheric Sciences. "CubeSats will also help answer questions in space weather such as the cause of disturbances in the ionosphere, and the rise and decay of the Earth's radiation belts during geomagnetic storms."

NSF's interest in CubeSats stems from a recommendation in a 2006 report--Report of the Assessment Committee for the National Space Weather Program--to increase the pace of space weather research.

According to the report, agencies involved in space weather should use micro-satellites with miniaturized sensors to provide cost-effective science and operational data sources.

In response, NSF created a new program to support CubeSat science missions. The first mission under the new program is a collaborative CubeSat project between physicist Hasan Bahcivan at SRI International and aerospace engineer James Cutler of the University of Michigan at Ann Arbor.

The mission, called Radio Aurora Explorer (RAX), will be a single triple-cube satellite, approximately the size of a half-gallon milk carton and weighing about three kilograms.

"With signals from powerful transmitters on the ground, which are then received in space, researchers will make unique measurements of small-scale structures in the ionosphere that can adversely impact communication and navigation signals," said Jorgensen.

"This project provides a cost-effective way of supporting space weather and atmospheric research," said Bahcivan. "It will also provide excellent training opportunities for students who hope to become future engineers or scientists. "

"We have a multidisciplinary, cross-departmental team working on the project, which includes several engineers and a large number of undergraduate and graduate students," said Cutler.

The first launch opportunity for the NSF satellite program will be via the Department of Defense Space Test Program, and is scheduled for December, 2009, aboard a Minotaur-4 vehicle to be launched in Kodiak, Alaska.

Launch support for the mission will be provided by NASA Goddard Space Flight Center's Wallops Flight Facility in Virginia.