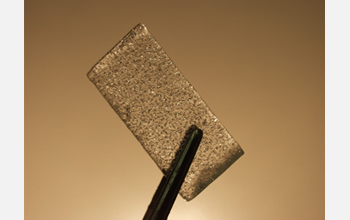 Bubbles containing ancient gases are visible in a piece of an Antarctic ice core sample.

In recent years, public discussion of climate change has included concerns that increased levels of carbon dioxide will contribute to global warming, which in turn may change the circulation in the earth's oceans, with potentially disastrous consequences.

In a paper published today in the journal Science, researchers presented new data from their analysis of ice core samples and ocean deposits dating as far back as 90,000 years ago and suggest that warming, carbon dioxide levels and ocean currents are tightly inter-related. These findings provide scientists with more data and insights into how these phenomena were connected in the past and may lead to a better understanding of future climate trends.

With support from the National Science Foundation, Jinho Ahn and Edward Brook, both geoscientists at Oregon State University, analyzed 390 ice core samples taken from Antarctic ice at Byrd Station. The samples offered a snap shot of the Earth's atmosphere and climate dating back between 20,000 and 90,000 years. Sections of the samples were carefully crushed, releasing gases from bubbles that were frozen within the ice through the millennia. These ancient gas samples were then analyzed to measure the levels of carbon dioxide contained in each one.

Ahn and Brook then compared the carbon dioxide levels from the ice samples with climate data from Greenland and Antarctica that reflected the approximate temperatures when the gases were trapped and with ocean sediments in Chile and the Iberian Peninsula. Data from the sediments provided the scientists with an understanding of how fast or slow the ocean currents were in the North Atlantic and how well the Southern Ocean was stratified during these same time periods.

The researchers discovered that elevations in carbon dioxide levels were related to subsequent increases in the Earth's temperature as well as reduced circulation of ocean currents in the North Atlantic. The data also suggests that carbon dioxide levels increased along with the weakening of mixing of waters in the Southern Ocean. This, the researchers say, may point to potential future scenario where global warming causes changes in ocean currents which in turn causes more carbon dioxide to enter the atmosphere, adding more greenhouse gas to an already warming climate.

Ahn and Brook state that a variety of factors may be at work in the future that alter the relationship between climate change and ocean currents. One potential factor is that the levels of carbon dioxide in today's atmosphere are much higher than they were during the period Ahn and Brook studied. The researchers hope that future studies of the ancient gas from a newly drilled ice core may allow a higher resolution analysis and yield more details about the timing between CO2 levels and the temperature at the earth's poles.