Key to Function of Dinosaur Crests Found in Brain Structure 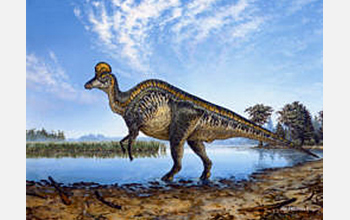 Paleontologists have long debated the function of the strange, bony crests on the heads of the duck-billed dinosaurs known as lambeosaurs. The structures contain incredibly long, convoluted nasal passages that loop up over the tops of their skulls.

Scientists at the University of Toronto, Ohio University and Montana State University now have used CT-scanning to look inside these mysterious crests and reconstruct the brains and nasal cavities of four different lambeosaur species.

At the annual meeting of the Society for Vertebrate Paleontology in Cleveland, Ohio, the team today announced new findings that suggest the crests were used for communication.

"These scientists have used cutting-edge visualization and reconstruction techniques to show that duck-billed dinosaurs likely communicated via sound and signal, " said Adam Summers, program director in NSF's Division of Integrative and Organismal Systems.

"Trace fossils were once our main window into the behavior of long-vanished organisms," said Summers. "Now, it's clear that the reconstruction of hard tissues and associated soft tissue is a powerful tool for understanding behavior and physiology."

"The shape of the brain can tell us a lot about what senses were important in a dinosaur's everyday life, and give insight into the function of the crests," said scientist David Evans, a paleontologist at the Royal Ontario Museum and the University of Toronto.

"It's difficult to infer the function of structures in an extinct dinosaur when there is so little resemblance to any living animal," said Jack Horner, a member of the team and paleontologist at Montana State University.

By using and analyzing CT scans, conducted by Lawrence Witmer and Ryan Ridgely of Ohio University's College of Osteopathic Medicine, the scientists were able to circumvent the problems of fossilization.

"Even though the soft tissues are not preserved in the fossils, the shape of the bones that encase the brain and nasal passages are," said Evans. "From there, the anatomy of these missing soft parts is easily interpreted."

The portion of the brain responsible for the sense of smell was relatively small and primitive, indicating that the crest did not evolve to improve that sense.

The CT scans documented a delicate inner ear that confirms that the dinosaurs could hear the low-frequency calls produced by the crest.

"We were surprised to see just how large the centers of the brain associated with higher cognitive functions were," said Witmer. "We suspected that the crested duck-billed dinosaurs used both vocal and visual displays, but now we see that they had the brain power and hearing to pull off these behaviors."