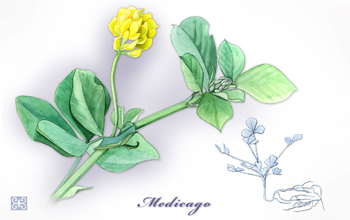 Researchers will study how Medicago truncatula, a small legume, adapts to high salinity.

The National Science Foundation (NSF) has made 20 new awards totaling $57.3 million during the 11th year of its Plant Genome Research Program (PGRP).

These awards, which cover two to five years and range from $350,000 to $6.8 million, support research and tool development to further knowledge of genome structure and function. They will leverage sequence and functional genomics resources to increase understanding of gene function and interactions between genomes and the environment in economically important crop plants such as corn, soybean, wheat and rice.

"Plant biologists continue to make significant conceptual and theoretical advances in our understanding of basic biological processes using plants," said James Collins, NSF assistant director for biological sciences. "It is clear that 21st century biology has become increasingly quantitative and interdisciplinary. The latest projects funded through the PGRP reflect this shift and will integrate innovative, cutting edge research with the training of the next generation of plant scientists at both research universities and small teaching colleges and universities."

The new awards, made to 45 institutions in 28 states, include international groups of scientists from Asia, Australia, Europe and South America.

A wealth of genomics tools and sequence resources developed over the past 11 years of the PGRP continues to enable exciting, new comparative approaches to uncover gene networks that regulate plant development and growth in changing environments.

This year's awards were selected from a pool of outstanding proposals, many of which leveraged data and other resources previously produced with PGRP funding. The outstanding quality of these proposals testifies to the PGRP's success in enabling innovative research.

The PGRP, which was established in 1998 as part of the coordinated National Plant Genome Initiative by the Interagency Working Group on Plant Genomes of the National Science and Technology Council, works to advance the understanding of the structure and function of genomes of plants of economic importance.