In Alaska's Forests, Dried Mushrooms to the Rescue? 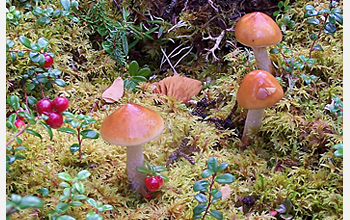 Warmer, drier climate may slow the release of carbon dioxide by fungi that produce mushrooms.

The fight against climate warming has an unexpected ally: mushrooms growing in dry spruce forests covering Alaska, Canada, Scandinavia and other northern regions, according to new research.

Results of the study appear online Nov. 3, 2008, in a paper in the journal Global Change Biology.

When the soil in these forests is warmed, fungi that feed on dead plant material, such as mushrooms, dry out and produce significantly less climate-warming carbon dioxide than fungi in cooler, wetter soil.

The finding came as a surprise to scientists, who expected warmer soil to emit larger amounts of carbon dioxide; extreme cold is believed to slow down the process by which fungi convert soil carbon into carbon dioxide.

"Although microbes such as fungi are among the smallest of life forms, they're also incredibly diverse and abundant," said Matt Kane, program director in the National Science Foundation (NSF)'s Division of Environmental Biology, which funded the research. "It's becoming increasingly apparent that our understanding of large-scale processes, such as how ecosystems respond to climate change, requires a greater comprehension of the biology of these small creatures."

Knowing how forests cycle carbon is crucial to accurately predicting global climate warming. This is especially important in northern forests.

Global warming is expected to hit northern latitudes hardest, raising temperatures between five and seven degrees Celsius by the year 2100.

"We don't get a vicious cycle of warming in dry, boreal forests, but instead, we get the reverse, where warming actually prevents further warming from occurring," said Steven Allison, an ecologist at the University of California at Irvine (UCI), and lead author of the paper.

Soils in the far north contain carbon from dead grasses, trees and shrubs. Like humans, fungi and bacteria in soil use plant carbon as a food source and convert it into carbon dioxide.

Allison and colleague Kathleen Treseder, also an ecologist at UCI, sought to find out what happens to carbon dioxide levels when boreal forest soil not containing permafrost is warmed.

About one-third of the world's boreal forests do not contain permafrost, which is mostly located in Alaska, Canada, Western Siberia and Northern Europe.

The scientists conducted their experiment in a spruce forest near Fairbanks, Alaska. They built small greenhouses and identified similar unheated plots nearby to serve as controls. Both plots received equal amounts of water.

The scientists took measurements in the greenhouses and unheated plots and found that by growing season's end in mid-August, soil in warmed greenhouses produced about half as much carbon dioxide as soil in cooler control plots.

A soil analysis found that about half as much active fungi were present in experimental greenhouse samples compared with samples from the controls. When fungi dry out, they either die or become inactive and stop producing carbon dioxide, the scientists said.

"It's fortuitous for humans that the fungi are negatively affected by this warming," said Treseder. "It might help offset a little bit of the carbon dioxide we are putting directly into the atmosphere by burning fossil fuels. It's not so great, however, for the fungi."

This work was also supported by the U.S. Department of Energy and a NOAA Climate and Global Change Postdoctoral Fellowship.