Bullies May Enjoy Seeing Others in Pain 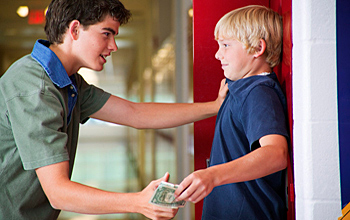 Brain scans of young, aggressive bullies suggest they may actually enjoy seeing others in pain, according to a new University of Chicago study.

Functional Magnetic Resonance Imaging (fMRI) scans of eight 16- to 18-year-old boys with aggressive conduct disorder and eight matched adolescents without conduct disorder led researchers to this new hypothesis. The study showed increased activity in an area of the brain associated with rewards when the aggressive boys watched a video clip of someone inflicting pain on another person. The control group did not have the same response.

The results are reported in the current issue of the journal Biological Psychology. The National Science Foundation supported the work.

"This is the first time that fMRI scans have been used to study situations that could otherwise provoke empathy," said lead researcher Jean Decety, professor in psychology and psychiatry at the University of Chicago.

Decety and his colleagues released a study earlier this year in which fMRI scans showed 7- to 12-year-olds are naturally empathetic toward people in pain. The new research showed that this natural empathetic impulse may be disrupted in ways that increase aggression in some young people who are prone to bullying and other aggressive behaviors.

"Aggressive adolescents showed a specific and very strong activation of the amygdala and ventral striatum (an area that responds to feeling rewarded) when watching pain inflicted on others, which suggested that they enjoyed watching pain," Decety said. The youth were shown video clips in which people suffered pain accidentally, such as when a heavy bowl unintentionally was dropped on their hands, and intentionally, such as when a person stepped on another's foot.

Researchers expected the test subjects to be emotionally cold to the events, but instead they registered a high level of arousal. More research is needed to determine whether the reactions indicated enjoyment at seeing others in pain.

"This work will help us better understand ways to work with juveniles inclined to aggression and violence," Decety said. Researchers anticipate the study will help identify strategies for dealing with young people who are at risk of growing up to be antisocial or even psychopathic.

Although researchers point out more research is needed to begin developing strategies, they have some initial ideas regarding where to look for solutions. Benjamin Lahey, professor of epidemiology and psychiatry at the University of Chicago, who co-authored the paper with Decety, says finding ways to help these at risk youngsters self-regulate their emotions might be one place to start. But he acknowledges past difficulties with the approach.

A system of non-punitive punishments for aggressive behavior and rewards for non-aggressive behavior may be another approach. "The possible difficulty in this approach is the need to find ways that compensate for the fact that aggression might be self-reinforcing in these aggressive youths," said Lahey. "But at this point we don't have enough information to draw strong conclusions. Implications for treatment largely will depend on what we find in our next study."

Decety's and Lahey's work was assisted by University of Chicago students Kalina Michaslska and Yuko Akitsuki.